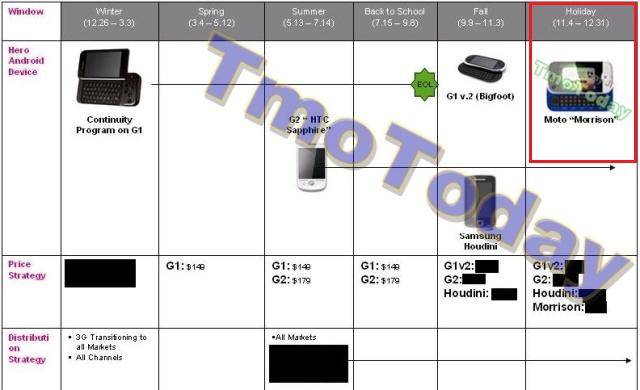 The leaked T-Mobile 2009 roadmap has re-emerged, this time with a little less black-out and an extra splash of Motorola.  Tipped to arrive over the late-November/December Holiday period, the Motorola Morrison looks to be the first self-branded Android device from the company to reach the T-Mobile USA network.

Details on the Motorola Morrison are scant, in fact pretty much everything we know has to be gleaned from the tiny image you see here.  From that, we can tell that the smartphone has a slide-out QWERTY keyboard and what’s presumably a large touchscreen.

Of course, the image used on the roadmap could well be a simple mockup or “lookalike” device intended as a placeholder until the eventual Morrison emerges.  TmoToday promise pricing details closer to the handset’s launch.