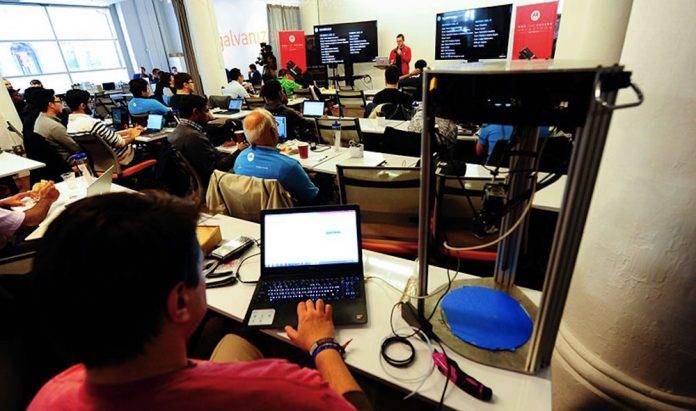 The Moto Z + Moto Modo is perhaps the most successful modular phone system today. It’s not fully modular but the idea of add-ons and accessories has been embraced by a lot of geeks. It’s not the same as the LG G5 and Friends and we can say that Motorola did a good job in promoting the Moto Mods. Thanks to the Moto Mods Development Kit system and the recently launched Moto Mods Developer Portal.

Last weekend, a special event was held in New York City that saw dozens of developers, designers, and entrepreneurs in one place for the Mod the Future Hackathon. It’s the first ever kind of event sponsored by Motorola and we have a feeling it won’t be the last.

The Moto Z accepts Moto Mods and the hackathon aimed to be a launchpad for those who want to show off their concepts for future possible add-ons. The event allowed the community to showcase their projects. We’ve seen a few including a retail shopping Mod called Smart Cart, a video paging mod, an emergency mod, water pollution testing mod, and some insulin monitoring. These are only a few shown off during the hackathon.

Participants came from five countries: US, Canada, Mexico, Brazil, and Latvia. The place was filled with wires, microscopes, and soldering irons and the energy of the genius hackers resulting to a total of 17 projects being submitted.

Three Moto Mods were chosen as the top projects: Advanced Audio, Sidepad, and Bella. The Advanced Audio is a digital-to-analog converter (DAC) and analog-to-digital converter (ADC) while the Sidepad is a gamepad plus gaming control in one. Meanwhile, the Bella is for the ladies as a skin care companion with built-in sensors that offers skincare and beauty tips. It gathers data such as air quality, UV levels, and even skin elasticity levels.

The hackathon in New York City was only the first. A similar one will be held on January 21 to 22 in San Francisco. Grand Prize winners of both hackathons have yet to be named. Prizes to be given away include a Moto Z phone, Moto Mods Development Kit, and a $5,000 team cash prize.

The winners will go to Chicago to present their project to Motorola and Lenovo executives for possible funding. Expect to hear more about new Moto Mods in the coming months as more developers start working on their projects.