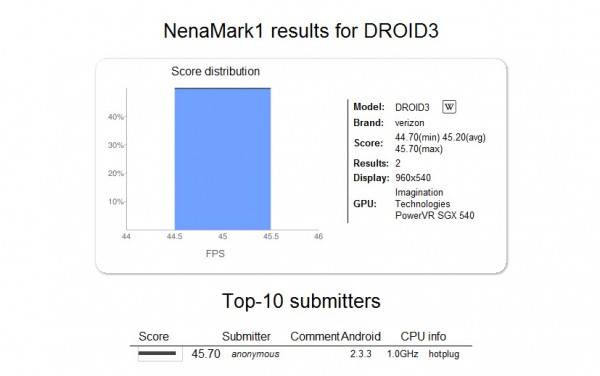 Benchmarks for the yet-to-be-announced Motorola DROID3 have emerged, giving us hints as to the specifications of the upcoming Android smartphone. According to the stats at Nenamark, the DROID3 uses a PowerVR SGX 540 GPU powering a qHD resolution, 960 x 540 display.

The phone is also running Android 2.3 Gingerbread, or at least was at time of testing. The PowerVR GPU closes off suggestions that Motorola would use the Tegra 2 chipset for the DROID3, instead indicating that it’s Texas Instrument’s dual-core 1GHz OMAP4430.

Meanwhile we already known that the qHD display measures in at 4-inches, and that the DROID3 has a front-facing camera. No word on launch date, but if Motorola is benchmarking the phone then that might suggest it’s imminent.