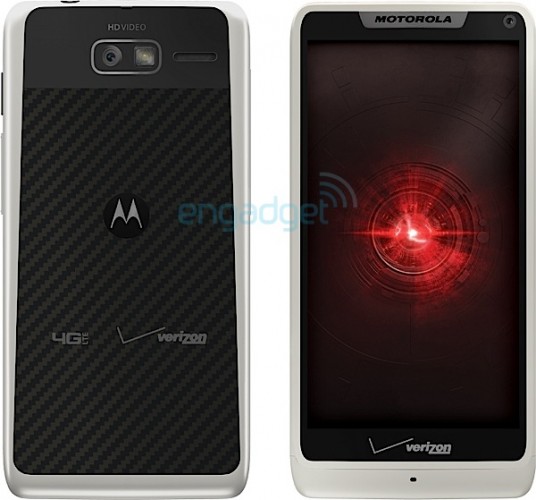 If you’re looking for an upcoming smartphone from Verizon Wireless with those quick 4G LTE speeds we might have just the device for you. It’s from Motorola and is rumored to be called the DROID RAZR M. This budget friendly improvement over the first RAZR has leaked again this afternoon, only this time in white so lets take a look.

We’ve heard plenty about this Motorola smartphone in the recent past, and it was also leaked late last week as a budget smartphone headed to Verizon for $149. That isn’t technically “budget” friendly but considering many current phones have launched at $199 or even $249 — that is a bargain.

The Motorola DROID RAZR M looks very similar to the original DROID RAZR and still features the Kevlar coating on back and 8 megapixel 1080p HD video capable camera, but this leak shows a white or what almost looks like an aluminum silver model. The image above was conveniently leaked to Engadget just a week or so before the big reveal. You’ll also get a 1.5 GHz dual-core Qualcomm processor and a 4.3-inch qHD display and Ice Cream Sandwich with the new smartphone.

Motorola and Verizon are hosting a media event on September 5th many are expecting to be the DROID RAZR HD that has seen plenty attention as of late. New details have many thinking they’ll drop both their new flagship RAZR HD, and this newly leaked budget DROID RAZR M at the same time. We’ll be live in NYC for the big Motorola reveal so stick around Android Community for all the details.