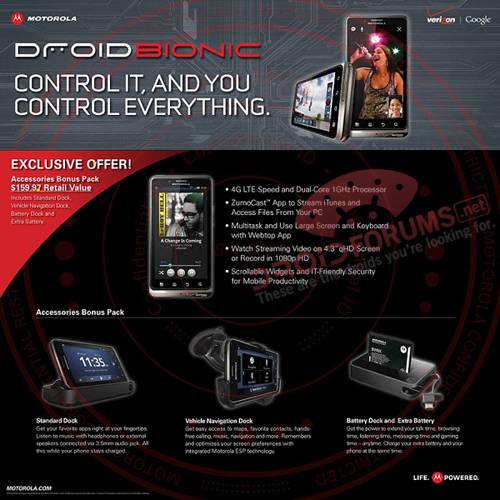 As usual Costco will be trying to steal as many Best Buy Mobile and Verizon customers as they possibly can and now they are planning one awesome bundle of accessories for when the Bionic finally goes on sale. We have still been hearing $299 come launch on September 8th but we don’t have any official price at this time.

The image above is just one of many leaked images regarding an awesome deal coming from Costco. When the Droid Bionic launches they are planning to sell the handset, car dock, desk dock, and an extra battery with charging dock all for the same price as Verizon, just $299. Those accessories wont be cheap and are worth around $160 if you bought it all separate. I don’t know about you guys but I’d be headed to Costco instead of Best Buy come launch date, unless they have a deal or two of their own but this is hard to top.

Reports are also claiming that the September 8th launch date is accurate and Costco stores will receive demo models and display units around that time-frame and will start selling said device with awesome accessory bundles shortly after. With how much has surrounded this device, and how popular it’s expected to be, most likely there will be some lines at Costco if this deal is legit. We will report back when we see anything more official but for now more details and pictures are at the via below.