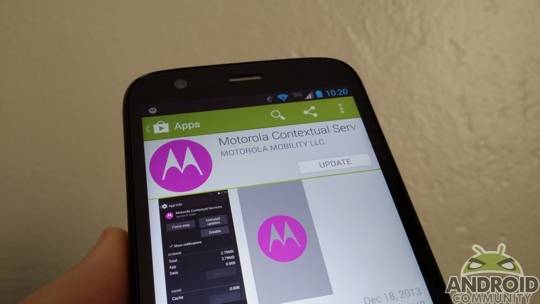 Motorola has been steadily adding some of their core apps to the Play Store. Over the past few weeks we have seen an update for the Touchless Control app and also the Camera app. And as of today, it looks like another has arrived. This latest is dubbed Motorola Contextual Services and while there is a change, this update isn’t front facing.

But with that in mind, the app is coming for some of the newer Motorola handsets including the Moto G and Moto X. Perhaps more important — this is one that users will want to update and simply leave installed for future updates. You see, the Motorola Contextual Services app will affect other Motorola apps and services.

According to details coming from Motorola, this app provides support and helps keep the other Motorola apps up to date. But key here is the warning that came along with details of the app. Motorola has offered the following;

“Motorola Assist and Motorola Touchless Control may not work if you uninstall Motorola Contextual Services.”

As for this particular update, the app jumps to version 5.16.06 and brings some bug fixes as well as support for Bluetooth driving detection. Otherwise, aside from the earlier mentioned Touchless Control and Camera app, Motorola also has the Assist, Connect, Active Display, Migrate, FM Radio and numerous others in the Play Store.

Bottom line here, this is just another in the growing list of Motorola apps being updated in the Play Store as opposed to sitting and waiting for an overall system update. While this particular update was not quite as exciting, Motorola did provide a fun update with the Boot Services app recently — that one brought falling snow to the boot animation.