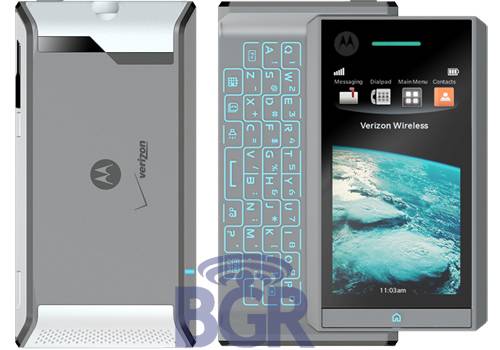 Verizon’s first Android device could be the Motorola Calgary, after an unnamed but trusted source confirmed that the sliding QWERTY handset will indeed run Google’s open-source OS.  The Calgary was first spotted in render form back in December 2008, as part of Verizon’s 2009 Motorola line-up.

In fact the Calgary will not only be Verizon’s first Android device, but Motorola’s too.  The ailing US company has previously confirmed that it was developing mid- to high-end Android devices, although no specific handset details were made public.

Little, therefore, is known about the Verizon Motorola Calgary, though it’s said to focus on social networking.  Motorola were tipped to bring their first Android handset to market by the end of Q2 2009, but it’s unclear whether this timescale is still accurate for the Calgary.