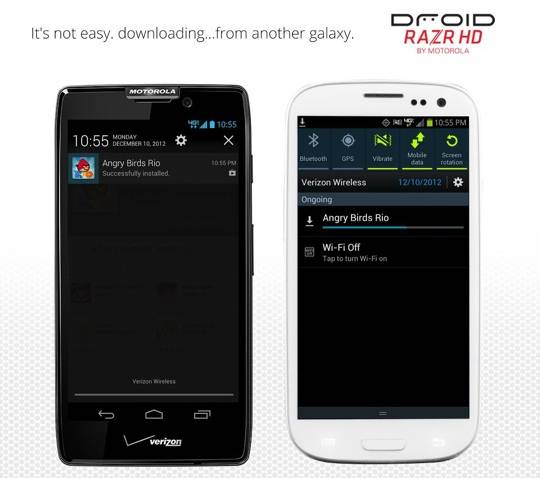 Motorola has recently posted a new image over on Facebook. You can see that image here in the post, but the long and short — they appear to have put the Droid RAZR HD up against the Galaxy S3. Of course, having seen previous sales reports for the Galaxy S3, it becomes a bit easier to understand why Motorola choose this particular handset.

Anyway, the image sort of speaks for itself, showing the Droid RAZR HD with a downloaded and installed version of Angry Birds Rio while the Galaxy S3 is still downloading. And looking further in, both handsets are running on Verizon 4G LTE, however they managed to capture the Droid RAZR HD showing full bars.

Moving away from the faster downloads and the longer battery life, Motorola also took aim at the overall durability and highlighted the Kevlar coating and water-repellent nanocoating that you will find on the RAZR HD. All said and done, both handsets have some good points and some bad points. The one thing that seems clear here, the Galaxy S3 must be a pretty hot device considering Motorola has decided to go public with such a campaign.