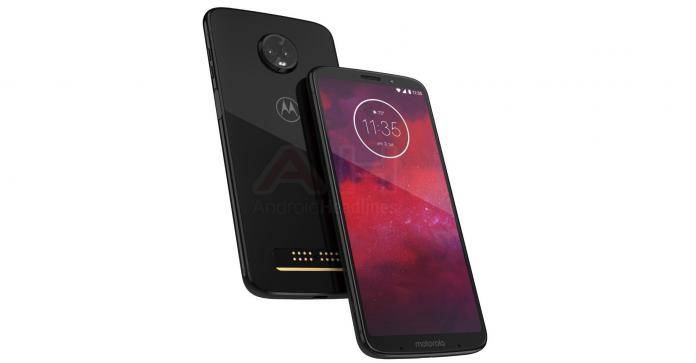 The Moto Z3 line will enter the mobile market with two new phones–the basic Moto Z3 and the Moto Z3 Play. The latter offers support for Moto Mod and we’ve learned a lot of information about it. Image renders and a 360-degree video were shared online, followed by the KARBON SHIELD case that leaked. Another post plus some more live photos showed dual cams and smaller bezels. We’ve shared with you everything we know so far and what you need to know about the Moto Z3 Play.

As for the Moto Z3, the upcoming smartphone from Lenovo-Motorola will look similar to the Moto Z3 Play. The two look one and the same based on the image provided. This means they are two different variants with the same design. We’re guessing there will be slight differences in specs and dimensions. This somehow proves the possibility that there will be no more Moto Z3 Force. Motorola may be retaining just the Moto Z and the Play variant that offers support for Moto Mods.

The Moto Z3 series may be lighter and thinner than the Z3 Play because there won’t be any port or hole to attach the Moto Mods. One difference we notice on the Moto Z3 is the edge-to-edge display that is almost bezel-less. The chin is there but reduced significantly. When it comes to imaging, there’s the dual rear camera system that will obviously be found above the Moto logo.

There is the possibility Moto Z3 is the more premium Z3 variant so we can assume the specs and features are improved from the Z3 Play. The Play variant boasts a Qualcomm Snapdragon 636, 4GB RAM, and max of 64GB on storage. When it comes to imaging, the phone may have a 5MP selfie camera and dual 12MP + 8MP cameras. There’s also a 3000mAh battery plus microSD card support. The 3.5mm headphone jack appears to have been retained.

Motorola is expected to make an announcement this June 6, tomorrow, at a special event. We’re only anticipating for the Moto Z3 Play but we won’t be surprised if the Moto Z3 will come along.