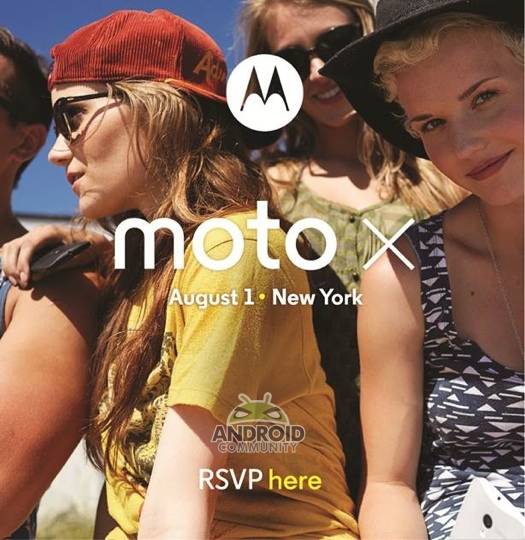 Motorola has taken the next step towards releasing the Moto X. The company has just announced an event for August 1st. The event invite didn’t reveal much in the way of details, but it is refreshing to see that an event date has been announced. The image that accompanied the image (seen below) has nothing more than a few people sitting around.

Of course, as you can see — two of those people are holding a Moto X. You can see the handset in both white and black. But otherwise, it is just Moto X, August 1st, New York. We will be live onsite to bring you all the details with as much hands-on time as we can get in before they kick us out for overstaying our welcome.

Looking back and we have been seeing plenty of Moto X rumors. We have also seen a bit from Motorola, however that has been more teaser and low-key. For example, they recently offered a look inside the Texas plant. Remember, the two points that Motorola is pushing deals with the ability to customize the handset and also the fact that it will be assembled in the USA.

Otherwise, the speculation is pointing towards the handset having either a 4.3 or 4.7-inch display. And regardless of the size, the display is expected to be 720p. Motorola is also expected to have the Moto X available with a wide variety of carriers. We have seen an image of the Verizon model leak and earlier today we saw details of a release with US Cellular.

With that, the important part to remember here is that while Motorola has a Moto X event planned for August 1st — they have yet to say when the handset would actually be available for purchase. Regardless though, it is looking like the specs as well as all the details about the customization options will be official in the beginning of August.