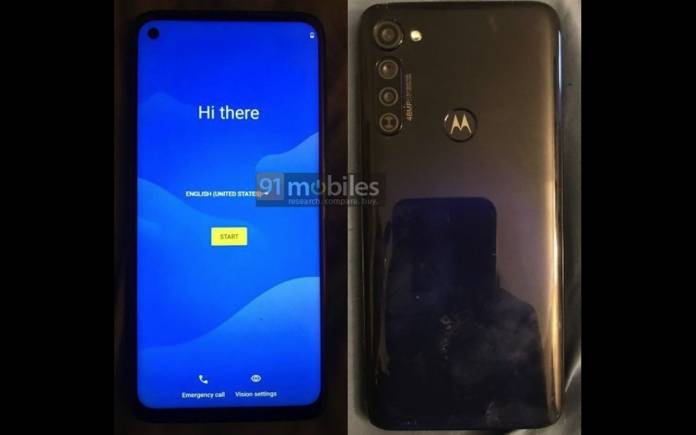 Last week, we told you about the possibility of Motorola releasing a new smartphone with stylus. It may be something like the Samsung Galaxy Note or an LG Stylo but we highly doubt now if it will be considered a premium phone. At the moment, Motorola doesn’t have the luxury to roll out really expensive phones. We’re not sure about the numbers of the Lenovo-owned company but we’re just glad it’s still in the mobile business. A Motorola phone with stylus is coming and here are some leaked images.

After that image render by Evan Blass, a set of live image has surfaced online. A source (@gusgio8glz) shared the photos online of a mysterious Motorola phone. It’s a new phone that hasn’t been announced yet and we’re assuming this is the Moto G Stylus.

The name isn’t final yet but the device has become interesting now that there are live images. It’s believed to be a prototype only. Nothing much has been detailed but we see a hole on the upper left part of the screen that is probably for the selfie camera. We’re just curious why this one still has very obvious bezels.

Motorola is expected to make an announcement at the upcoming Mobile World Congress (MWC 2020). A new flagship phone is anticipated. It could be the Moto G8 or the Moto Edge and this Moto G Stylus.

A related listing on Geekbench has been sighted as well. The post lists the specs of the Moto G Stylus. The smartphone is said to feature the following: 6.3- or 6.4-inch display, Full HD+ resolution, 4GB RAM, Qualcomm Snapdragon 6-series processor, 128GB onboard storage, 4000mAh battery with fast-charging support, multiple cameras including a 48MP primary shooter and a 117-degree wide-angle action cam. The phone is believed to come with a rear-mounted fingerprint reader embedded at the logo.

The Moto G Stylus has scored only 311 points in the single-core test and 1,316 in the multi-core test. We’re assuming it will run Android 10 out of the box. Let’s wait and see for further leaks and the official announcement.