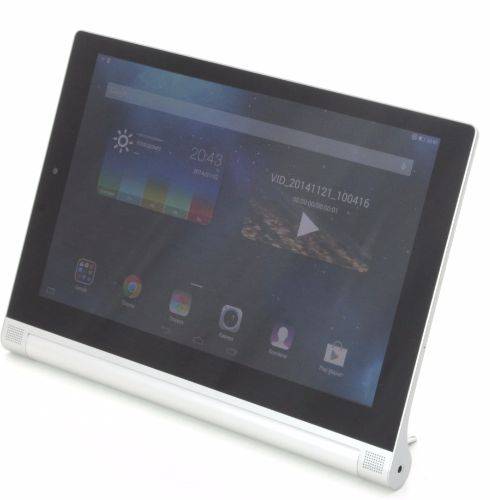 A few days after some images of the rumored upcoming new Lenovo Yoga 3 were leaked, we have a new round of “guess the specs” and even more pictures of the newest addition to their tablet line. A Ukrainian retailer has actually posted a product page, complete with specs and details of the 8” tablet, and a few image as well. Now as to whether you’ll believe an online retailer over in Eastern Europe is up to you of course, but it wouldn’t hurt to take a look at what it’s saying.

It’s a good thing some folks were able to screen cap and write down the details though, because, as expected, the page has been taken down already (which may or may not give even more credence to it). When it comes to design, it looks like it’s basically the same as the previous two Yoga tablets that have been released, which includes a built-in stand and a cylindrical battery on one side. But one thing people have noticed from the previous leak and this current one is that instead of a front and back camera, you actually have an 8MP 180 degree rotating one, that you can use to either take pictures or to do video calls (and selfies too of course).

The product page also details a 6200 mAh battery that has longer life at 20 hours, as compared to others in its category. As for the other things on the inside, the page listed a Qualcomm Snapdragon 210 quad-core processor, 1GB of RAM, an 16GB of internal storage that can be expanded using the microSD card reader. The 8” tablet will have a 1280 x 800 pixel IPS display and will have front-facing stereo speakers.

Connectivity will be Bluetooth, WiFi and optional 4G LTE. It will also supposedly have Android 5.1 Lollipop out of the box. Price is expected to be lower than the Yoga 2. Now let’s see if the Ukranian retailer actually pressed the publish button accidentally or they’re just making up a wishlist of what the Yoga 3 should be like.