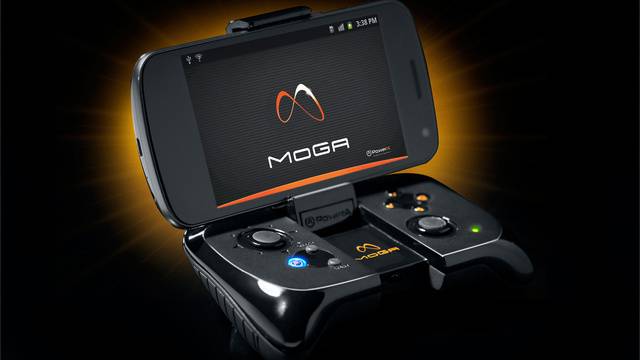 I’ll just come out and say it: touchscreen controls suck for action-packed, complex games like, say, N.O.V.A. 3. That’s what makes the Xperia PLAY popular despite mid-range hardware, and why so much energy is expended on getting existing controllers to work with Android. MOGA isn’t the first controller we’ve seen specifically for Android, but it does appear to be one of the best thought-out around, and it already works with games from Gameloft, Sega and others.

The MOGA uses a style we’ve seen before: a flat-ish controller with a clip mechanism that expands and contracts to fit your phone. When folded flat, it’s a little over twice the size of the Galaxy Nexus with the phone attached. It follows the standard of modern console controllers, though it opts for dual analog sticks with no D-Pad. FPS fans will love it, fighter and puzzle fans, not so much.

The best part is that the manufacturer is publishing dev tools and APIs so that any game developer can get in on the action. They’re already well in with some major publishers, so N.O.V.A. 3, Six Guns, Duke Nukem and Sonic The Hedgehog 4 Episode II are already working. There’s also a completely separate controller for tablet gamers. Details on availability and price are scarce, but we should know more after E3 next week.