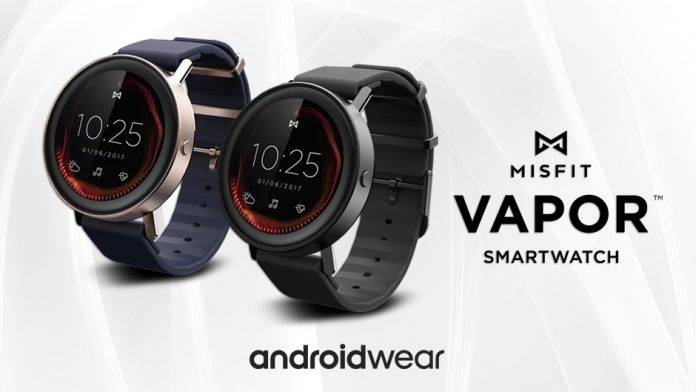 At the Consumer Electronic Show last January, Misfit introduced their first touchscreen smartwatch with a wearable called Vapor. Now two months later, they’ve given us more details about the device, and probably the most important fact is that it will be running on Android Wear 2.0, the platform’s latest major update. They still haven’t said exactly when it will be available and where people can buy it but it will be sometime this summer and it will be priced at $199.

Calling itself a “design-forward touchscreen smartwatch”, the Misfit Vapor has a 1.39” full round AMOLED display and is powered by a Qualcomm Snapdragon Wear 2100 processor, has a 4GB internal memory, Bluetooth and WiFI connectivity, and has all the tracking options that you can normally find in wearables and fitness devices lately: accelerometer, altimeter, gyroscope, optical heart rate sensor and GPS. You can also play music or podcasts even without your connected smartwatch since it has a built-in player.

Since it will be running on Android Wear 2.0, you will be able to customize its watch face, setting up your favorite apps or fitness goals, or your calendar so you can see it as a glance. You will also be able to download and launch apps directly since it has Google Play built into it. Google Assistant is also now built into it so you can just OK Google your way throughout the day.

The Misfit Vapor will be priced at $199 and will be available in Jet Black and Rose Gold, plus interchangeable straps. Summer is the expected release period so expect more detail soon.