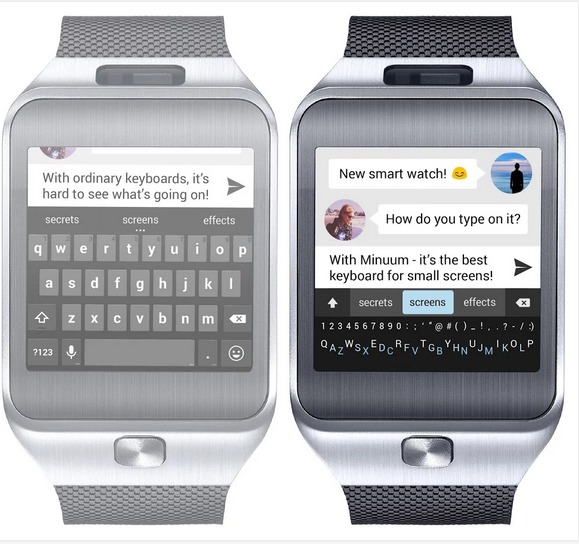 The latest update for Minuum, “the little keyboard for big fingers,” now includes support for smartwatches, just in time as the newest Android Wear devices hit the market in the next few weeks. Version 2.7 also has new mini animation features for its other virtual keyboards, as well as several bug fixes.

Last time, we told you about how Minuum was developing an app that would support the circular interface of the upcoming Moto 360. But in the meantime, the new update brings much-needed support for Android-based smart watches. You can now install the app directly onto your Galaxy Gear or Pebble from the Google Play Store or if you’re using and Omate TrueSmart smartwatch, you can download the app from your Ostore’s tools section. It is now even more responsive as to the size of the screen of the device you’re using.

The circular keyboard, currently under development for the circular-faced Moto 360, will be another one of their unique creations that aims to revolutionize the way we use the QWERTY style of keyboards that we’ve gotten used to. They’ve introduced the horizontal type of virtual keyboard for phones and tablets that do not take up as much space as the ones currently installed in our gadgets.

Aside from the support for smartwatches, Version 2.7 also has a new transition animation when toggling between full and mini mode on your phone or tablet. To try it out, you just need to drag the suggestions bar up and down. Another new feature is the ability to disable auto-spacing if you’re the kind of person who wants to control where you put your spaces (yes, there are people who refuse to do it the traditional way, for some reason). Just go to the settings, then the experimental and advanced tab to disable auto-spacing.