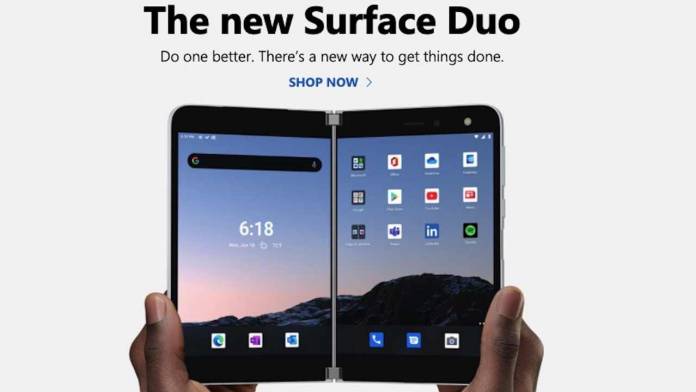 Microsoft has come a long way with its Surface Duo foldable smartphone that is now available for purchase – unlocked from Microsoft and with carrier restriction on AT&T – in the US. While many users are already enjoying the experience brought forth by the Snapdragon 855-powered dual-screen phone that folds up like a book. There are buyers who are taking to Twitter to report certain bugs they’re identifying on the Surface Duo.

According to a report by MSPU, Erica Griffen, one of Microsoft’s early reviewers has faced “issue with the video driver or other hardware,” while some users have noticed issues with gesture recognition. Clark, another user, mentioned in the report, also found the Play Store to be improperly optimized for the dual-screen display.

Playstore isn’t even optimized for the dual screens pic.twitter.com/xnAj6Eqaxb

Microsoft recently rolled out the September security patch and core fixes for Surface Duo. On the outside, these seem more user-specific problems which should be solved with the firmware update.

Microsoft Surface Duo, for those planning to get one, has a pair of 5.6-inch Pixel Sense AMOLED screens bound by 360-degree rotating hinges. It comes in 128GB/256GB variants drawing energy from a 3,577mAh battery. The phone is not stellar when it comes to cameras – it comes with an 11MP (f/2.0) single camera on the rear. You can grab one of these smartphones for $1,400 in the US, date of availability outside of the US is not official yet.