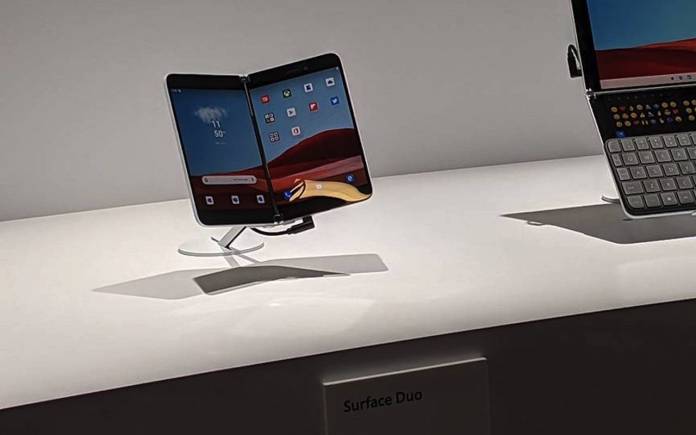 The Microsoft Surface Duo will still arrive. We are closely watching this product because we find it interesting that the software giant is transitioning to Android. The company is slowly recognizing the importance of the widely used mobile platform. The phone-tablet is said to arrive before the Galaxy Fold 2 launch. It may offer better Surface Pen stylus support. Units are already being tested so it may really come earlier than scheduled. Several videos have been leaked online so we pretty much have an idea about the upcoming tablet.

Forget about that failed Microsoft Surface Duo demo during livestream. The device that was introduced late last year together with the Surface Neo will be unveiled soon. Over the weekend, we learned the Surface Duo would be coming with a new multitasking feature.

Microsoft previously released a Nokia X. The Android experience may be similar on this new tablet but expect a number of important changes. There will be the Microsoft Launcher as the main feature among others. It will now be viewed in landscape mode which is the preferred view in most tablets. The launcher can also be viewed on dual-screen.

‘App groups’ is another new feature. It is similar to the Samsung App Pair available on the Galaxy And Note collection. This lets you come up with groups that would let you run two apps on both screens (one each). The paired apps will launch quickly and at the same so you can easily use them.

The multi-window view allows for efficient multitasking so you can get more done. The App groups feature will have you creating a shortcut. It will be pinned to the home screen. A quicker access to apps is enabled especially to those programs that you use regularly. When you click on the shortcut, the two apps will launch at the same on the two screens.

We can also expect the Microsoft Launcher 6 will be available on the Surface Duo. More programs will be announced including stylus integration and ‘peek’ feature. Such features are best for the dual-screen Surface Duo. We’ll get to confirm everything once the device is released this coming August.