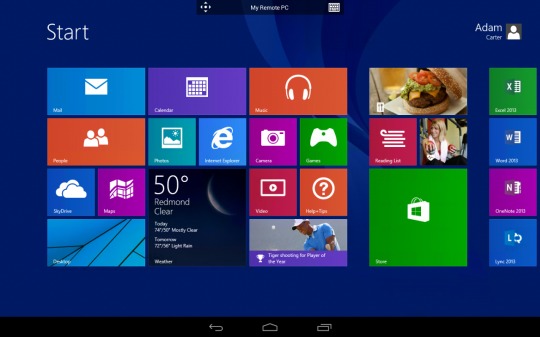 Redmond has just pushed an update to its Windows remote desktop app on mobile platforms. While there is nothing groundbreaking in this maintenance release, in a way it is reassuring to see Microsoft’s commitment in maintaining its app on other platforms.

It’s been over a month since Microsoft first announced and then launched its Remote Desktop app. Developed with Windows 8 in mind, the app uses the company’s proprietary Remote Desktop Protocol (RDP) and RemoteFX technologies to bring an almost seamless remote desktop experience from mobile devices running other platforms. Statistics show that downloads have gone beyond a million. Considering that number of users, it’s good to see that the app isn’t just a one-off stunt.

Aside from the customary performance improvements and bug fixes, this update to the app adds two features for Android devices. The first feature adds support for the pinch-to-zoom gesture in the app even when set to mouse pointer mode, which usually utilizes only a single point of interaction. Secondly, the update improves on the support for stylus input, which should make some users of Samsung‘s Galaxy Note line of devices happy.

The update to the Microsoft Remote Desktop app is already up on Google Play Store. There are also corresponding updates being pushed to iOS and Mac OS X. Quite ironically, the Windows Phone version of the app is still no where to be seen.