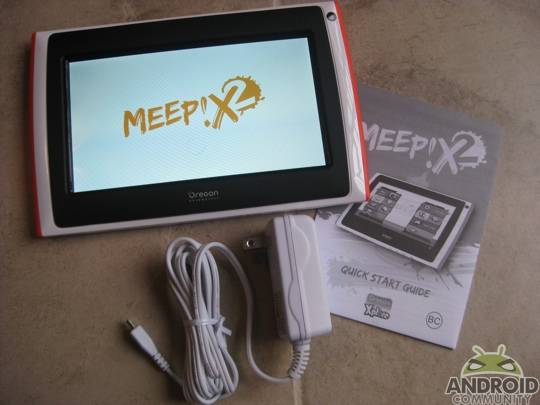 Oregon Scientific unveiled the MEEP! X2 tablet back in October. And for those not familiar, the X2 came as the follow-up to the original MEEP which was introduced a year earlier, in October 2012. A quick look at the two tablets and there are more than a few similarities in terms of looks and styling, however the MEEP X2 has stepped up in terms of the specs.

One bit that remained was the rugged form factor and given that, we felt comfortable enough handing the tablet over to one of the younger kids in the Android Community family. So with that in mind, read on for some thoughts about the tablet and about how it performed during our testing.

Let us first begin with a bit about the hardware. The MEEP! X2 is a tablet with a rugged exterior. That should help ease the minds of the parent, but in terms of looks and comfort (holding the device) — it is impressive on both accounts. We will admit that we didn’t do any hardcore drop tests, but the device does feel durable. There was a few bumps along the way, but those were relatively safe. The tablet was knocked out of bed and off a table, but in both cases only fell a few feet to a carpeted floor. And for those worried, the MEEP! X2 also has a splash-proof design. 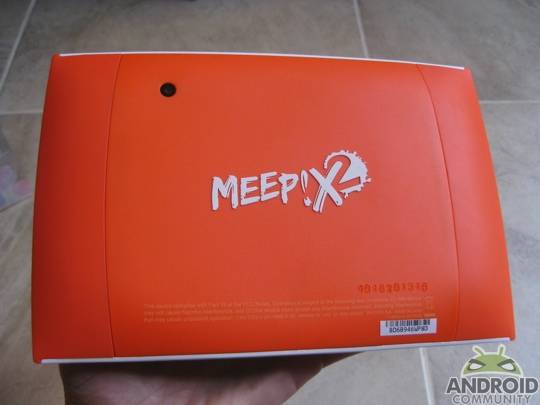 The backside of the tablet features a curved design that allows it to sort of settle into your hands. Otherwise, the MEEP! X2 tablet has a 7-inch display and a front- and rear-facing camera. A power button and microphone sit on the top and the bottom is where the HDMI, microUSB and microphone and headphone jacks are located. There is also a speaker on the bottom. A microSD memory card slot is also present, though, this is tucked away under the (removable) side panel.

The tablet supports cards up to 32GB in size and otherwise, has 4GB of internal storage. In our test unit, that left roughly 1GB internally for the end user. Those considering a purchase can also expect a dual-core 1.2GHz processor with 1GB of RAM, Bluetooth 4.0 and WiFi for connectivity. Specific specs aside, the tablet seems to have performed well enough in day to day use. That is to say there weren’t any complaints from the kiddies doing the playing. 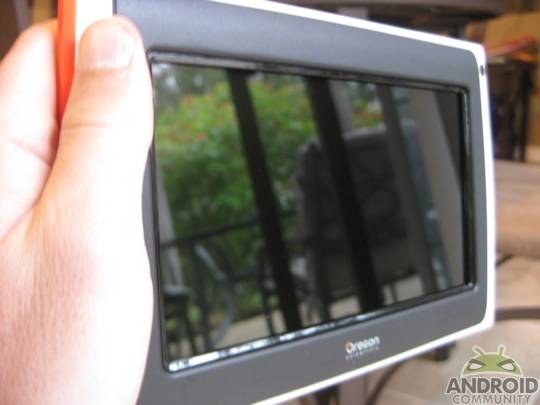 Not to mention, there wasn’t any real issues during the times the tablet was in the parents hands. The catch here, depending on what other devices the parents are using, there may be some noticeable differences. To begin with, the display isn’t super sharp and clear like some may be used to. Still, for the intended market and at the price point — there really isn’t anything to complain about here.

Perhaps more important though, this tablet isn’t necessarily about the hardware specs. In this case, we would say the tablet is more about what it can do, and furthermore, whether it can make the kids happy. For that, we went through the initial setup process, made sure the battery was charged and then handed the tablet over to a 6-year old to begin playing. Again, we got no complaints. But adding to that, the tablet was used that evening, put down for bed and picked back up again in the morning. The only complaint from the kid doing the playing, the battery had died and the playtime had come to an end.

Getting started with the MEEP! X2 has the grown up setting up a parent account. The tablet is running Android 4.2.2 Jelly Bean, though it is highly skinned and has clearly been designed for the younger audience. Basically that is to say that while this is a Jelly Bean tablet, there doesn’t appear to be much Android. You will see it sneak in though. For example, the navigation buttons in the lower left and time, WiFi and battery indicator in the lower right are clearly Android. 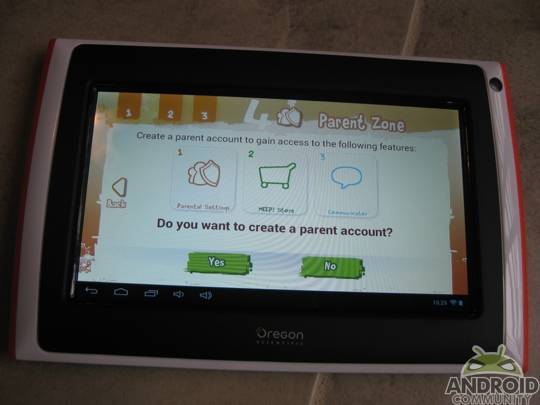 Once up and running you will end up at the screen you see in the image sitting below. Both of these can drag up for more and they contain a mix of everything needed. For example, the left side contains access to the child and parent account sections, as well as the News and Notifications sections, the browser, communicator, MEEP! Store and YouTube. The right side contains the Settings, Music and Videos as well as Games & Apps, Pictures, Camera and e-Books. The right side also has a Safety & Help section available. 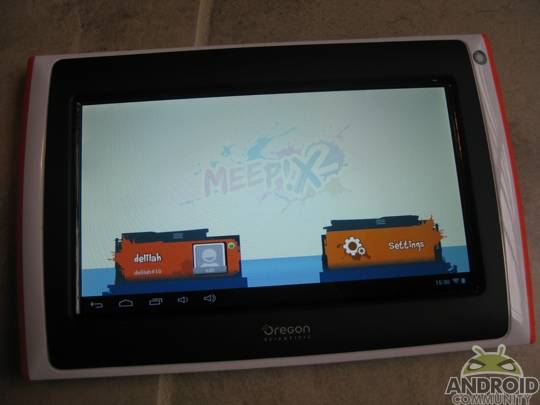 The MEEP! Store launches to show My Apps, Media, Game, Apps and E-Book categories. These are all pretty much self explanatory in terms of what each offers, but suffice to say, the MEEP! Store will offer goodies such as Panic Flight, Polar Slide, a drawing game called Jambo, a piano app called Mini Piano and much more.

The Play Store access is available by way of the left side navigation panel in the Parental Controls section. Those venturing into the Play Store will need to either create, or login using an existing Google account. Otherwise, the Parental Controls section shows Parental Settings, Notifications and Child Account sections in that same left side navigation panel. The Child Account section is just as the name would imply and it contains the details you added during the initial setup process.

The Notifications section ties in with the Parental Controls. Here parents can approve (or deny) any requests made from the child account. In day to day use, the child can request access to features not already available. Diving into the main section here, the Parental Settings, and we find options to choose between a High or Low level of security as well as a Custom level that allows for more of a personalized setup.

The high level option blocks out all online functions while the low level allows the child to go online. The low level also removes any time restrictions. Both of these levels filter bad words and bad URLs. While the custom level took a bit more work to get setup, we found this to be the best option. The custom level offers the parent the option to either block and/or set a time limit on each function of the tablet. The time can be set for unlimited or a variety of pre-set options.

Touching back on the store and also the pre-loaded content and we find that most children should be happy and comfortable. Even without opening the Store, the MEEP! X2 is fully loaded. It was said there are more than 50 pre-loaded apps and while we didn’t count them all, there are more than a handful of games, as well as some television and other goodies such as a music and videos section — each of which has some pre-loaded content. And that microSD card slot will come in handy for those looking to sideload additional content.

Before we mention anything further, we should point out the price — $149.99. While there may be some cheaper (sub-$100) tablets available these days, the MEEP! X2 comes with a rugged and splash-proof design which should make it a bit more appealing given the intended audience.

In our experience the MEEP! X2 was able to hold up very well in day to day use, though we would not describe it as being a powerhouse. As well, the display was not the highest quality, the battery life wasn’t what we could describe as stellar and depending on the light situation, the camera took pretty poor pictures. A few untouched sample images can be seen below.

But that is not to say the experience was poor overall. In fact, going back to the exterior design — that is solid and made us feel comfortable putting it in the hands of a 6-year old. And on top of that, we maintain that the software is a big part of the overall experience and just like the outside, given the mix between the freedom for the children and the control for the parents — that was able to make up for any shortcoming in terms of picture quality and battery life. 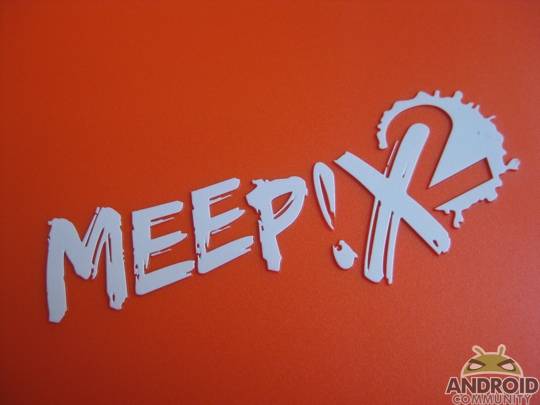 Simply put, this tablet is kid-friendly. I put this in the hands of my 6-year old and let her go to town. Even as a child with regular access to an iPhone and iPad, she was very happy with the tablet and without any prompting on my part she was able to find all the features and navigate around without issue. There is something to be said about a kid-friendly setup.

On the flip side, there were a few times she was frustrated when she could not access something, but again, that is where the parental controls come into play. As a parent that likes a good mix of technology and non-technology time, those time settings were wonderful to have available.

Bottom line here, this is a good way to introduce your child to an Android tablet. For a relatively low entry price you can get up and running on a device that is fully featured in terms of software. Also, one that will hold up for the younger, and not always as gentle younger generation. And while hidden, the MEEP! X2 does have Play Store access which will allow you to build up a staple of apps that you can eventually move over to another device should you feel your young one is ready to graduate to a more grown up tablet.