It’s that time of the month again when Google is reporting about the latest Android Distribution for the past month. For April, Lollipop was still holding on to its crown but that’s the last time as Marshmallow has finally taken over it. In May, Android 5.0 went down to 30.8% of the market while Android 6.0 remained at 31.2%. We expected this would happen soon and we know the chunky Android will remain on top for the next few months. It may even go over a year because Android Nougat is a bit slow in expansion.

The new Nougat captured 9% of the market. Meanwhile the old Android versions Gingerbread and Ice Cream Sandwich each account for less than one percent at both 0.8%. Jelly Bean only had 8.8% while Kitkat slightly decreased to 18.1% (from 18.8%). Looking at the Screen Sizes and Densities, “normal sized” devices are still preferred, specifically those with xhdpi screens (extra-high ~320dpi). 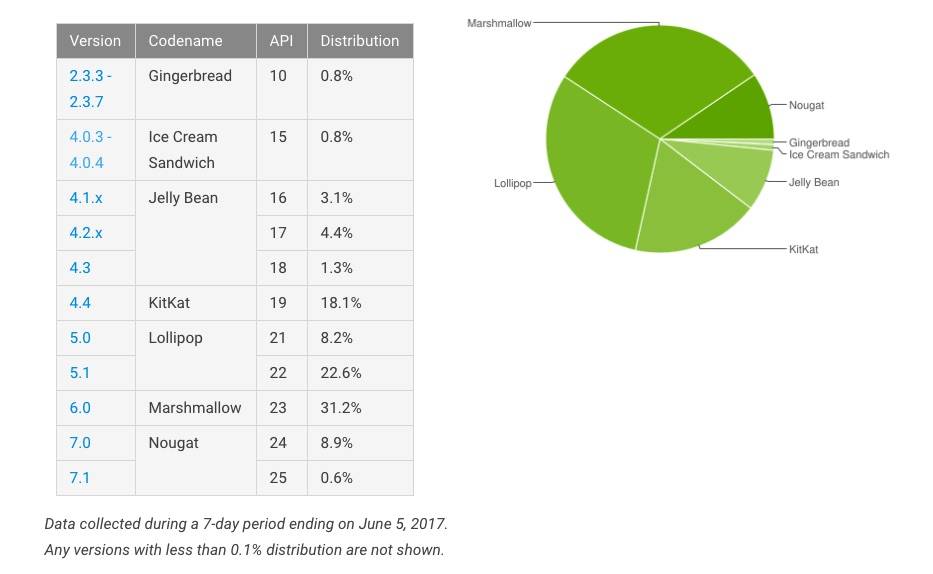 The developers also just released the latest Android Securtity Bulletin for June 2017. This one includes an important fix to what is described as a ‘critical security vulnerability in Media Framework’. This issue must be fixed at once because there is a possibility for a remote attacker to cause memory corruption during media file and data processing. With a custom file, the memory may be corrupted if not fixed this early.

Good thing there is no report of customer exploitation yet but it is best to be prepared. Your Pixel, Nexus, or Android device deserves much protection so make sure you get the source code patches immediately. It is recommended you get it within 48 hours from the Android Open Source Project (AOSP) repository.

The latest Factory Images for Nexus and Pixel devices are also now available. They allow you to restore your phone’s original factory firmware if you want the factory version or if you have done something before like flash custom builds or run the AOSP.

This usually erases data from a device so be careful. Backup your data first. You may also check the Full OTA Images for Nexus and Pixel devices to manually update your phone.