We don’t know what’s happening here but Lollipop is still King of the Android game. Marshmallow follows closely behind. We said March could be Lollipop’s last month of reign but it still is strong on top. Its share is still 32% while Marshmallow is still at 31.2% just like the previous month. Android Nougat went up to 7.1% from 4.9%. Android 4.4 KitKat is down to 18.8% from 20%.

As for the other desserts–Cupcake, Donut, Eclair, Froyo–are no longer part of the Android distribution pie. We’re guessing Ice Cream Sandwich and Gingerbread will drop out of the race in the next few months as well. 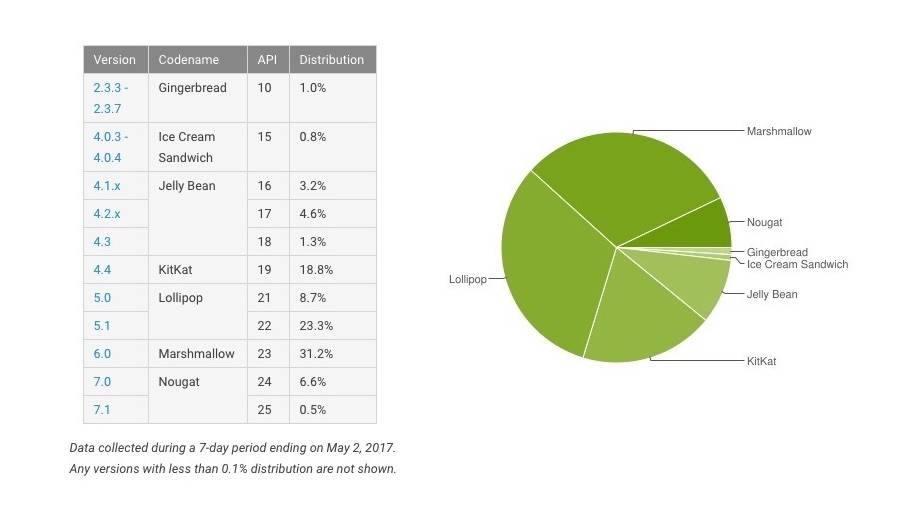 When it comes to screen size configuration, there’s a significant move as xhdpi was overtaken hdpi at 35.8% against 35.5%. This means designers and developers may consider the bigger screen configuration to prioritize for their apps.

This May, Google will officially be unveiling the Android O at the Google I/O Conference. The new OS version will soon enter the game and will definitely get a share of the market albeit we’re expecting also slowly as the Nougat.

Mobile carriers and OEMs are now busy rolling out Android 7.0 OS updates so we can expect the numbers will change once again in the next four weeks. We’re hoping it will be significant in favor of the chunky, chewy treat.