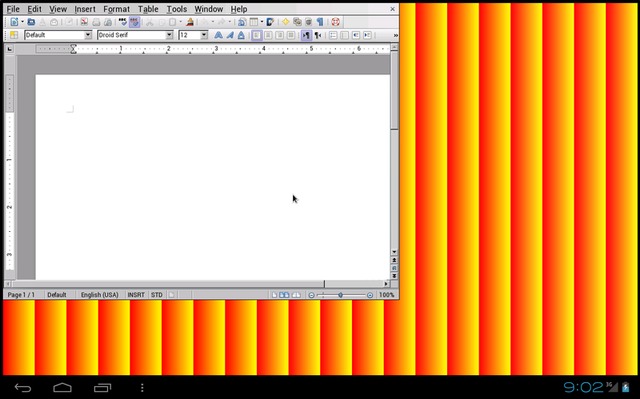 A few months ago we brought you news that LibreOffice, the open source offshoot of popular free office suite Open Office, was headed to Android. While it would be wrong to say that the team of developers is making rapid progress, progress is nonetheless being made. The prototype app for Android tablets (Honeycomb and Ice Cream Sandwich) was recently shown off in a single screenshot. Without passing too much judgement this early in development, I can say this: for those frustrated with the relatively sparse feature-sets of mobile office suites like Google Docs, it’ll be well worth the wait.

LibreOffice is published by a series of volunteer developers called The Document Foundation. The team is mostly former members of the Open Office project who left when Oracle bought Sun Microsystems, who had previously funded Open Office. With more than 8 million downloads in 2011 alone, it’s fast become one of the favorite free office suites for desktops, and is included by default in many Linux distributions. In addition to Android and iOS versions, The Document Foundation hopes to create online editions of the various application in LibreOffice using HTML 5.

LibreOffice includes all the basics of an office suite: a Word-style document manager, spreadsheet program, presentation program (PowerPoint-style), database manager, vector tool and formula editor. It’s not clear which of these programs will make it to the Android port, though the first three would seem to be a given. There’s clearly a lot of work that needs to be done (especially to create a powerful yet touch-friendly interface) but the project remains an exciting one for work-focused Android users.