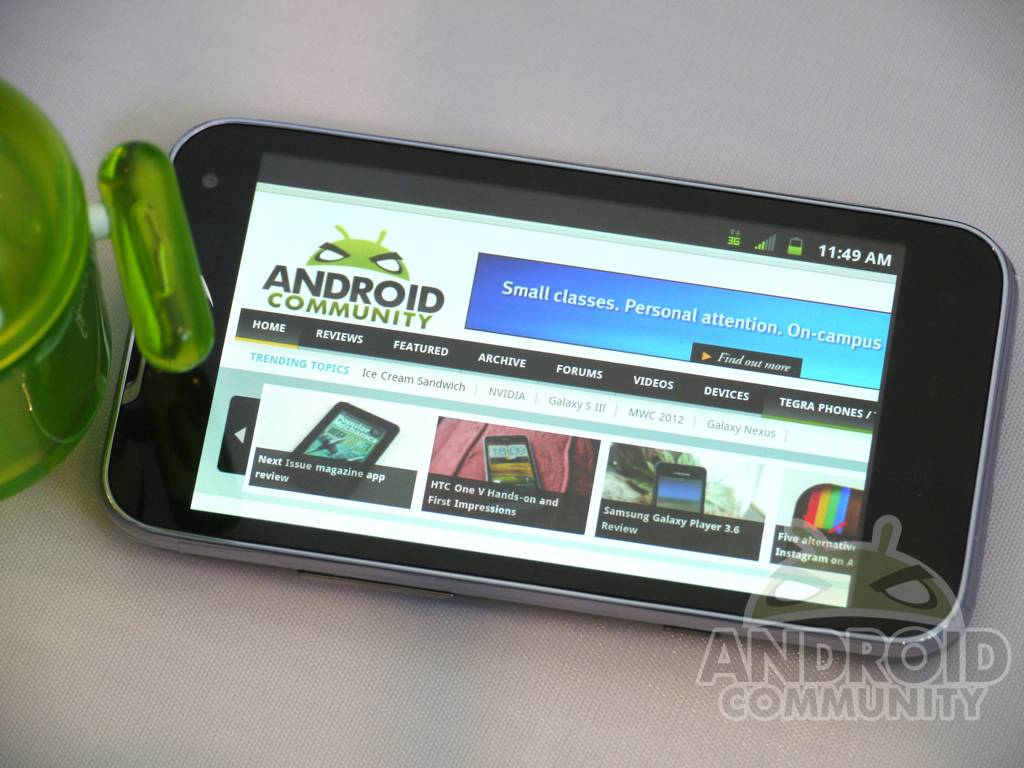 The brand new 4G powered LG Viper 4G LTE will be available in a few short days. Starting April 22nd for the Now Network. Being the first LTE device not on Verizon or AT&T we wanted to give it a quick look. LTE still isn’t quite available from the Now Network, as it replaces their WiMAX, but we’ve tossed the phone through the ringer anyways so read on below for our full thoughts and plenty of pictures.

Hardware
Now the LG Viper is a nice phone that is for sure. The look, feel, and build quality are all pretty top notch. Sadly the specs leave a little to be desired but here’s a rundown of the hardware you’ll get. The Viper 4G LTE comes with a 4.0-inch 480 x 800 display that is bright and decently crisp, but if you’ve seen or used a 720p HD phone or even a qHD like the HTC EVO 3D you’ll be disappointed. We have a Qualcomm 1.2 GHz dual-core processor, 1GB of RAM, and 8GB of internal storage. Around back it’s outfitted with a 5 megapixel camera with flash, capable of 720p video. 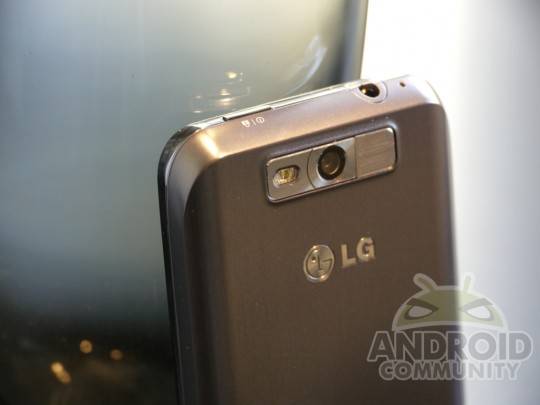 According to LG the Viper has a “platinum” rating by UL Environment for its sustainable build quality and packaging. Claiming the phone’s body is 50 percent recycled plastic. With an aluminum bezel around the face and a brushed aluminum designed plastic battery cover the phone looks impressive and expensive, while remaining lightweight and still durable. I actually am really pleased with the build quality, even if the battery door creaks at times.

LG’s build quality is improving almost with every release but I have a feeling the back of this phone could get scratched pretty easily. Being only a 4-inch screen the device does have a great feel in the hand, it isn’t overbearing or extremely large like the Galaxy Note, and will make a great first-time smartphone buyer plenty happy. The phone isn’t a flagship device or anything, so it’s safe to say the carrier is just testing the LTE waters with this phone first and have bigger plans coming soon — like the Galaxy Nexus.

To start check out our hands-on coverage and video below then we’ll dive into software, performance, camera, and that battery life.

Software
LG’s tossed what I’d call a pretty stock version of Android 2.3.7 Gingerbread on the Viper. With 2.3.7 you’ll get full Google Talk video chat with the VGA front camera. The OS is extremely simple, pretty, fast, and familiar for anyone that has used Android. LG however has made a couple very minor changes with widgets, a few settings in the menu, and changed the launcher to have the carriers ID pack. 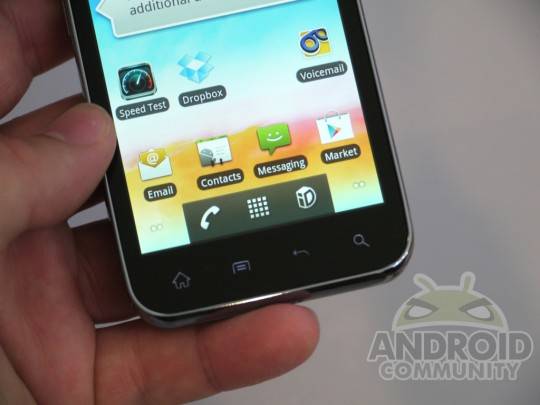 Android 2.3 Gingerbread runs impressively well here, and the vanilla untouched nature of the OS probably is to thank with no MotoBLUR, or Sense UI overlays on top. LG also opted to release the phone almost like a Google Experience device and they’ve added no bloatware to the phone. Other than a few carrier specific apps for ID, Nascar, and NBA Mobile this is completely free of bloatware and even has Google Wallet on board.

With daily use this past week the phone actually feels extremely quick for an older S3 dual-core processor, but most likely LG’s sped up some animations and helped make the phone fast, stable, fluid, and perform well. I’ve had zero freezes, problems, crashes, reboots or anything of that sort. It’s safe to say the experience has been top notch. My only complaint is the capacitive touch buttons backlight turns off WAY too fast, and doesn’t even give you time to look at the screen first – in terms of the phone. The carrier 3G speeds leave plenty to be desired and 4G LTE can’t arrive soon enough.

Benchmarks
As usual we’ve ran a few benchmarks just to see where the phone stands. Thanks to the smaller screen, and lower resolution along with that powerful dual-core chip the performance is stellar. My comments above state it clearly, and the benchmark results confirm it. Getting around 3000 in the popular Quadrant suite I was pretty surprised. This is no S4 like the HTC One S, but it still performed excellent.

We also ran a few rounds of Vellamo as it tests overall performance, page rendering, and provider/carrier too. The Viper 4G LTE scored higher than most and beat out many newer faster phones, and that was without LTE.

Speedtest
While the Viper 4G LTE is here at my house in Las Vegas, the Now Network’s 4G LTE is not. AT&T and Verizon have a pretty wide reach of LTE but things are just starting to take off here for the other two main US carriers. I was able to get 3G only with the Viper, and since it doesn’t have WiMAX anymore the 3G speeds were quite low and very underwhelming to say the least. Even T-Mobile’s 4G is 3-5 times faster than this. I experienced average speeds of around 1 Mbps downloads with nearly full 3G, peaking at 1.6 Mbps and uploads were even worse. 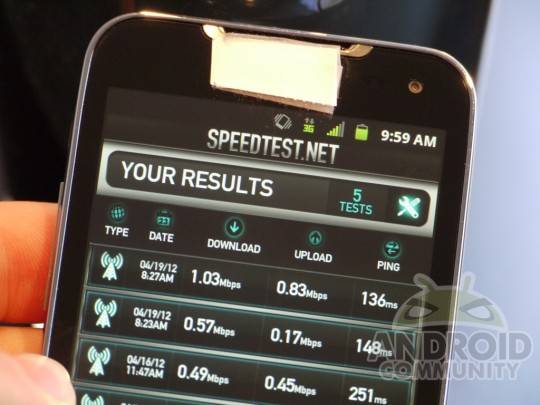 It’s safe to say this phone dearly needs 4G LTE to be activated to be used to its true potential. The carrier also is one of the only ones that offers truly unlimited data. Once 4G LTE arrives you’ll be able to stream video and do whatever else you’d like with fast speeds, and no limits. For now the phones quite limited and uploading pictures to Facebook, or updating apps was sub-par compared to other carrier standards.

Camera
The Viper is what we’d call a mid-range phone between the slightly slower processor, and the 5 megapixel camera when others all have 8 megapixels these days. However, if you’re a first time smartphone buyer, on a budget, or don’t need the best this performs quite well. The 5 megapixel shooter gave us decent results with good lighting, and without. It does have a LED flash should you need, and can take 1080p video too. Here is a quick photo sample with a video below and more pictures in the full gallery. 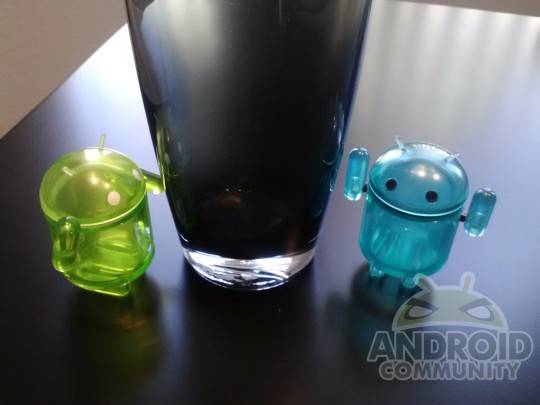 Battery Life
For now the battery life and results aren’t too important, mainly because we don’t have 4G LTE available yet so can’t test how the battery will hold up to the faster speeds. We’ve seen less than stellar results from both AT&T and Verizon’s LTE networks, and are hoping battery life is better over here. Standby battery is excellent and overnight the Viper went from 100% to about 78% in 8 hours. However once I woke up, turned off WiFi and started using 3G the battery had a quite large drop-off as you can see. I do have LTE enabled, even though it’s not available so that could be effecting battery life too. 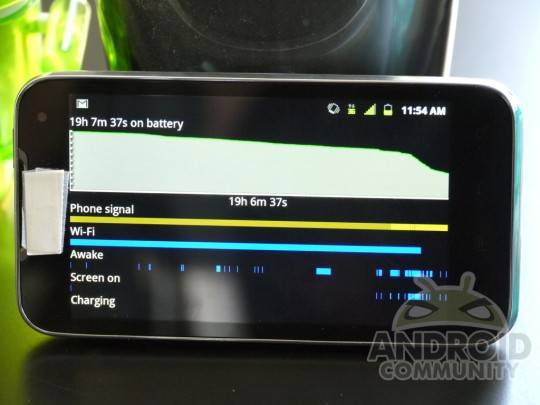 Once we receive the green light and the Now Network lights up 4G LTE we’ll be sure and test these battery results again, but for now we’ll just have to use the 3G ones provided. So take this as you will, knowing that they will be different once LTE arrives.

Wrap Up
Our initial impressions were quite favorable, after using the new LG Viper 4G LTE for the week we still feel the same way. The Viper is a good mid-range device, and a perfect fit for a first time smartphone buyer or someone on a budget. If you are looking for the best, fastest, or prettiest this isn’t the phone for you — and you might want to wait for the LTE equipped Galaxy Nexus.

If you can look past the lower screen resolution, the average at best 3G speeds, and know that LTE will make things considerably faster this is a great buy this summer coming in at only $99. The carrier calls it “future proof” because it will be able to use the new LTE network once it arrives, but the specs are already outdated so the purchase will be based on what users need, or want from a smartphone. If you have any questions feel free to ask, and enjoy the full gallery of images below.