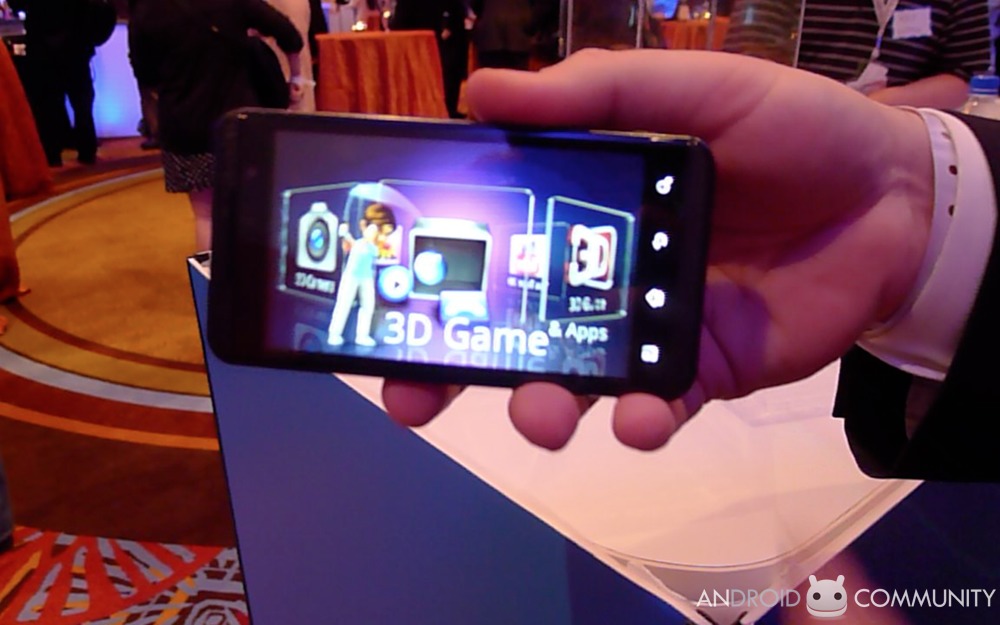 Whilst having a nice bite to eat at an AT&T event this past week at CTIA 2011, we were given the opportunity to check out the brand new LG Thrill 4G, a 3D capturing and sharing handset that’ll be released sometime this summer in North America. Now, before we get too far figuring out how many 3D devices are now on the market, note that this device is set to be the USA version of the LG Optimus 3D, a phone we got a short peek at during Mobile World Congress 2011 – this version is VERY* similar to that one.

*In fact, this phone is SO similar to the LG Optimus 3D that it’s basically indistinguishable, the one we’re looking at here actually the European build – which means this IS the LG Optimus 3D with a brand new name slapped on it: LG Thrill 4G. This phone will be launched with Android 2.2 Froyo, seems to have 2.3 Gingerbread in its future, and rolls out the gate with a pack o’ 3D content for your enjoyment.

There’s a dedicated button on the side that leads you to a 3D portal that’l ll allow you to pick from 3D Games & Apps, 3D Camera, 3D Gallery, YouTube 3D, a 3D Guide (with directions,) and another panel that’ll just have 3D Games. Why there’s one place for “apps and games” and another just for “games,” I do not know. It IS exciting to see YouTube 3D pre-loaded though, that aiming at a total 3D section coming up on YouTube in the very near future – which devices will be able to view it though, that’s the question.

The hardware consists of a 4.3″ WVGA touchscreen in front of a couple of 5-megapixel cameras which shoot from the back of the device. With these cameras, you’ll be able to capture both 3D photos and 3D video. This isn’t the lightest phone in the world – it’s got a lot of gear inside it. This isn’t the only 3D phone on the market – the HTC EVO 3D is a very similar phone and the war is indeed on.

Also take a peek at the LG Optimus 3D hands-on we grabbed back at Mobile World Congress 2011.