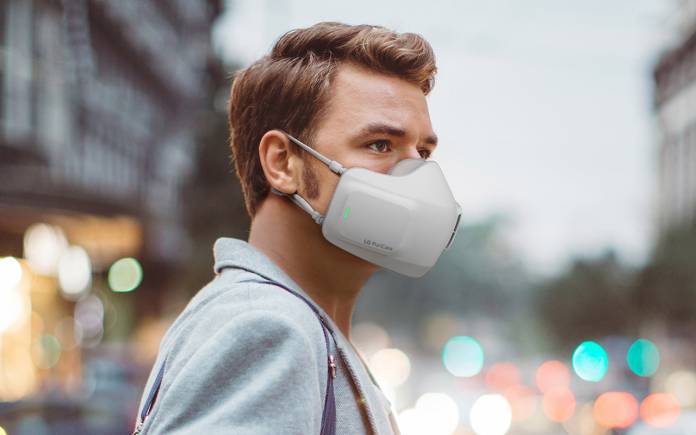 In a world where face mask is a must, you probably know how it can be challenging to wear one the whole day. A few minutes of wearing it is already uncomfortable. Some people may not believe you need it but for the sake of others who do, you may want to check out this LG PuriCare Wearable Air Purifier. It’s a face mask and air purifier in one. Mainly, it is a wearable air purifier that makes breathing fresh and clear air possible.

In recent months, we have seen how face masks and air purifiers became more important. They can be considered as everyday essentials now. LG’s idea is to combine the two by introducing the PuriCare Wearable Air Purifier at the upcoming IFA 2020.

LG won’t be in Berlin as the tech event will be virtual. The South Korean tech company has already announced that it is going to participate and it will be opening an interactive virtual booth. LG will be presenting a slew of smart home products including a new wearable air purifier technology.

LG is known for its air purification technology. It’s bringing the same tech to a smaller form for personal use. LG’s wearable air purifier features a Respiratory Sensor that can adjust the dual three-speed fans depending on the volume and cycle of the wearer’s breath.

The LG PuriCare Wearable Air Purifier is scheduled to be released in key markets. It’s a portable protection for everyone who wants to stop using those uncomfortable and disposal masks. With its two H13 HEPA filters, the wearable air purifier is definitely a smarter solution.

LG PuriCare Wearable Air Purifier will also fit snugly on the face of the user. With an extensive facial shape analysis, the product is ergonomically designed for the user’s comfort. This is to prevent any air leakage around the nose and the chin. It can work up to eight hours max (low mode) as made possible by the 820mAh battery. In high mode, the wearable air purifier can only last up a couple of hours.

To clean the face mask-air purifier, there are UV-LED lights that kill the harmful germs. The user can be notified that it needs charging or cleaning via the ThinQ mobile app. The LG PuriCare Wearable is totally recyclable and replaceable so it’s “green” and friendly to the environment.

The LG PuriCare Wearable Air Purifier will be presented next month at the IFA 2020 online. Watch out for this product and other innovations from LG.