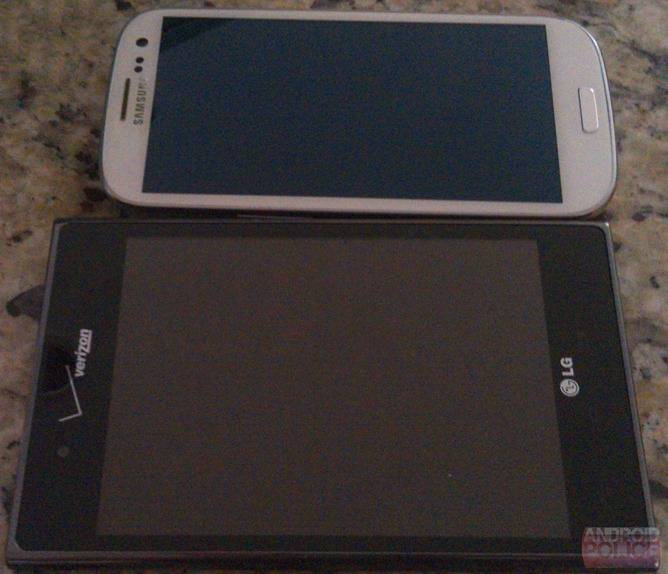 Samsung isn’t the only carrier on the block with a 5-inch or bigger “phablet” on Android. LG and their Optimus Vu is apparently headed for Verizon with 4G LTE after some leaked pictures of the device seemingly confirmed its fate. There was rumors of the Galaxy Note for Verizon as the Journal, but it looks like LG will get the go ahead instead.

The folks from AndroidPolice received a set of leaked pictures showing the full Verizon and 4G LTE branding on the Optimus Vu, as well as a comparison next to the Galaxy S III as shown above.

The LG Optimus Vu comes with a 5-inch 4:3 aspect ratio display, so it’s pretty wide for a smartphone. The device is rather large and will certainly be a niche product if you ask me, but we’ve received some hands-on already and you’ll want to check that out below.

The phablet rocks a 5-inch screen, Android 4.0 Ice Cream Sandwich, a 1.5 GHz dual-core S3 processor, 8 megapixel camera and a decent 2,080 mAh battery. The device is quite thin but also very wide and not to easy to hold. Are you interested in the Optimus Vu on Verizon, or are you hoping the Galaxy Note 2 makes its way to Big Red instead?