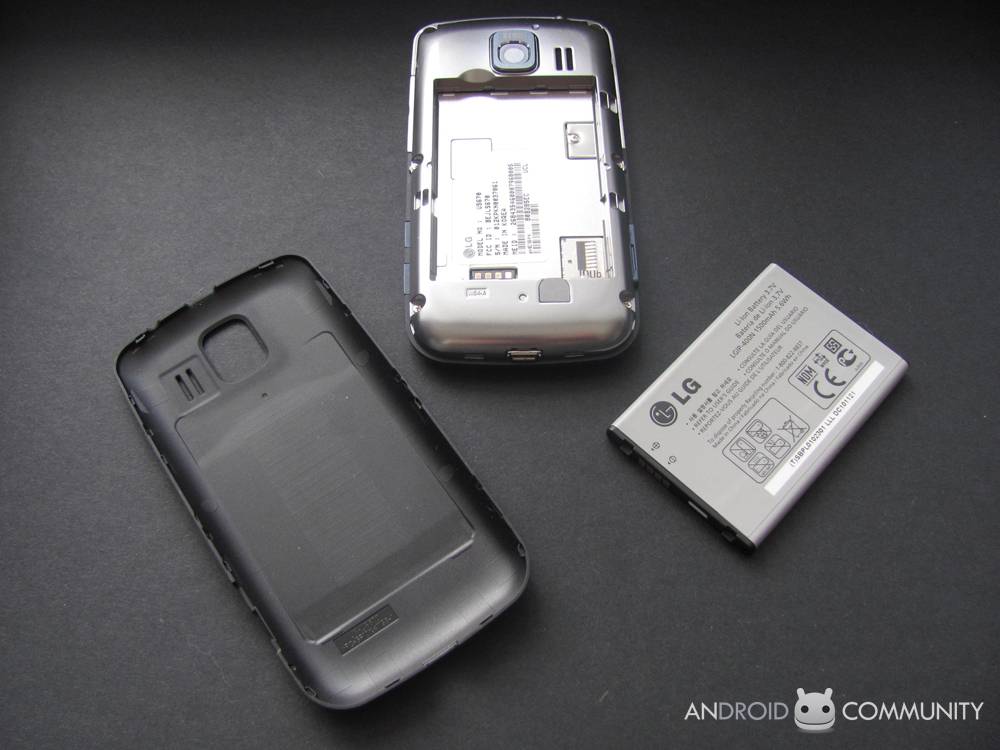 Take a look with us at this simple, cheap (free if you buy it now and turn in your rebate,) and overall cute and lovely little smartphone as we take it for a spin and check out what’s under the hood. First behold the unboxing then see as this cool tiny man running Android 2.2 Froyo with its 3.2″ capacitive touch screen acts like a bigger phone, runs like a higher grade phone (for the most part), but works simple like the inexpensive phone that it is. LG Optimus U is carried by U.S. Cellular and comes in blue.

The LG Optimus U comes ready to go with Android 2.2, model number LG-US670, and a suave dark blue exterior. It’s got four physical buttons on the front (menu, home, back, and search,) camera and simple-to-open back panel revealing battery on the back. USB port on the bottom, Micro SD chip slot on the left, power button and headphone jack on the top. The right side has a volume up/down, camera button, and voice dialer button – helpful! All buttons are extremely responsive and will satisfy the most stuck up button critic. On the front is a 3.2″ capacitive touch screen with 16M Color CGS and 480 x 320 resolution, dimensions are 4.56” (H) x 2.22” (W) x 0.62” (D), and weight is 5.57 oz. 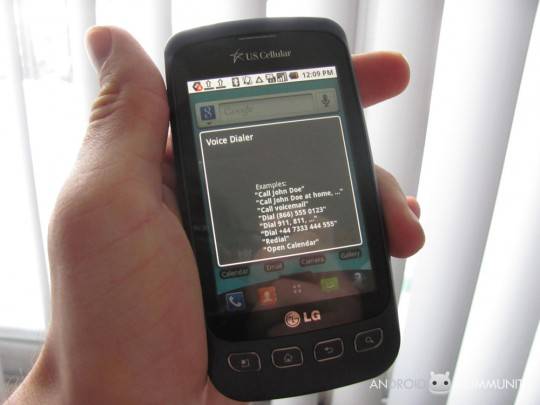 Connections include A-GPS with LBS and navigation, Bluetooth version 2.1+EDR with supported profiles HSP 1.2, HFP 1.5, OPP, FTP, PBA, DUN, A2DP 1.2, and AVRC. LG Optimus U can act as a mobile hotspot (and does so very well, I might add,) PC sync, works with a micro-USB connector that supports charging and mass storage mode, Wifi is 802.11 b and g. The microSD card slot can hold up to 32 GB (comes with a 2GB,) and headphone jack is the average 3.5mm.

Take a look at the unboxing and hands-on video here:

This phone comes with a stack of already-installed software, but nothing really you wont have come to expect from your average Android phone. On the first home screen you’ll see a Google search widget above Calendar, a simple configurable no-name Email, Camera, and Gallery. Screen 2 has Gmail, Voice Search, Talk, Android Market, Facebook, Twitter, News and Weather, MyContacts, ToneRoom (a US Cellular quick-link to their ringtone webpage,) Your Navigator Deluxe (by TeleNav, just incase you’re not into Google Maps for some silly reason,) and Help. 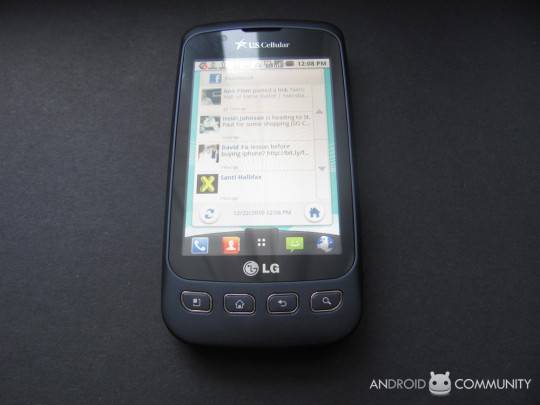 Screen one has a fun fullscreen Facebook widget. Screen four has a 1/2 screen Bookmarks widget (for the web browser) and a 1/2 screen Messaging widget (for texting.) Screen five has a 1/4 screen super-simple music widget, Video Player app, Voice Recorder app, and 1/4 screen YouTube widget. Along the bottom of the screen is telephone, address book, messaging, and browser. 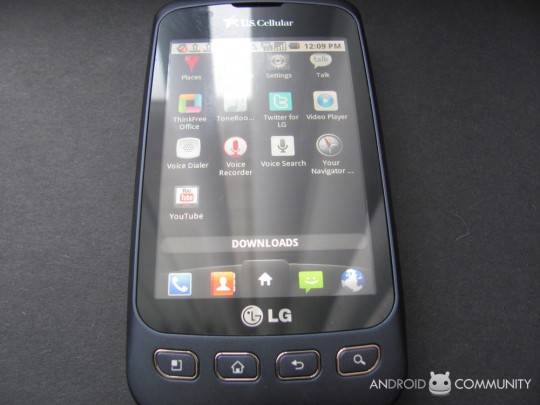 Inside your applications panel you’ll find a total of thirty-seven apps installed out of the box. These are all above the DOWNLOADS bar which is, of course, empty when you start it up. This might seem like a lot to a new user (which you’re probably going to be if you’re purchasing this phone, since it’s basically made for people new to Android,) but comparing it even to the also-new Samsung Continuum over on Verizon and you’ll see that 37 isn’t quite up to the 45 already-installed apps on that.

A surprisingly large amount of the apps are helpful and I’ve used in the past week of working with this phone. This might be because I know what each of them does and what they’re generally capable of, and this might not be the case for a brand new user – but I wouldn’t go so far as to say most of these apps are unnecessary.

The camera (single, on the back) is a 3+ Megapixel still shot with VGA video capture at 640 x 480. Take a peek at an example video here, recorded at night under medium light of our bunny and kitty just hanging out:

Then take a peek at a couple of photos taken first at night inside the house with all-artificial light: 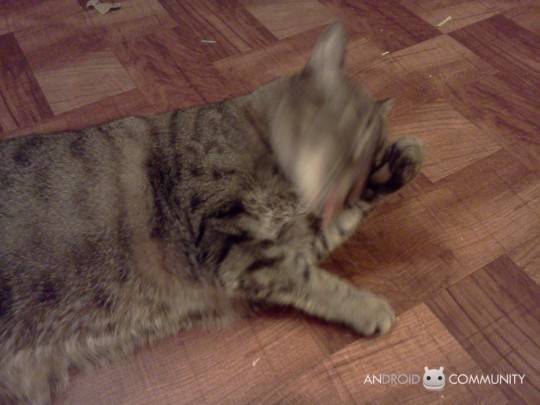 Then during the day with all natural light: 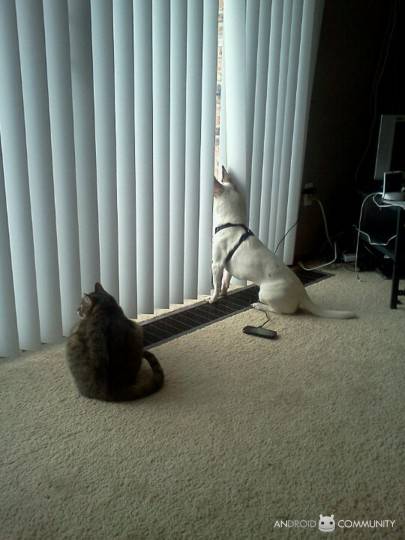 You’ll end up seeing these same differences no matter what camera you use, natural light of this kind and at this level making the photos look a LOT better, but check how nice the camera works in both situations considering the camera is supposed to be only 3 megapixels. I’d say pretty darn nice.

Phone calls sounds great, clear, nice, everything’s super awesome. As I mention quite often when reviewing phones such as this, I’m glad that the actual first function of a cellphone, mobile calling, hasn’t been left behind as the other functions have been brought to the forefront. It’s rare that a smartphone, even one as “entry level” as this one, have bad reception on either end. This is nice. 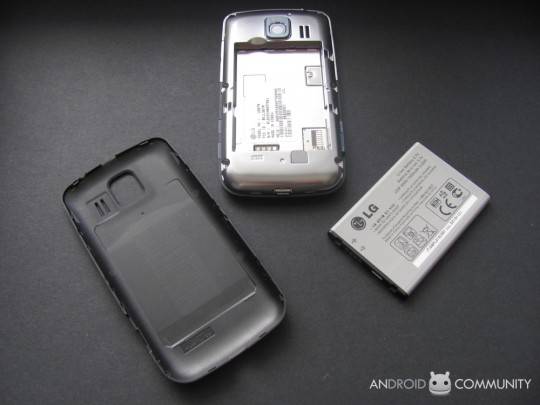 Battery is a 1,500 mAH and is said to last 7 hours of usage or up to 20 days of standby. The standby is a madly generous projection as we found it to be more like a couple days MAX, while the 7 hours of usage was much closer, our experience being closer to five. You’ll want to plug this guy in at the end of each day for sure.

The speaker, when plugged into no outside source, is REALLY loud. It’s at LEAST as loud as the Samsung Continuum and THAT’s as good as an iPod Touch.

This is a really really nice entry-level smartphone. I found myself using it several times when I had the option of using much nicer phones (I just happen to have a few right now on the review block) just to see how it held up – it definitely rocks. Anyone who starts their Android journey on this little man is going to want to stay right on the road to more glorious phones.

My only hesitation with this, the LG Optimus U, was the carrier – U.S. Cellular, as it really doesn’t have the coverage that other bigger brands do. I live in the Twin Cities in Minnesota (Minneapolis / Saint Paul) and the connection works great, no problem, but as soon as a visit my hometown up in Saint Cloud, MN, the connection just… isn’t there.

The rest of this phone is solid. Slick, quick, made for a new user, good enough for a veteran to play with. And the, what I would classify as, Royal Blue color – that’s just a smooth cool extra bonus. Well played, LG.