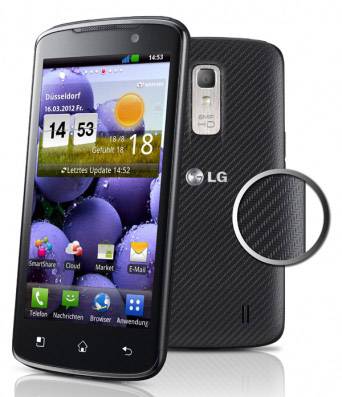 Though the Optimus 4X HD is LG’s current flagship, they aren’t done rolling out the Optimus LTE to all of its destined markets yet. Germany will get the Optimus True HD LTE (so called to differentiate it from AMOLED phones with 720p Pentile screens) sometime in the near future. LG kept the details close to the vest, and didn’t say when we’d see the Optimus True HD LTE, on which carriers, or for how much money.

US smartphone enthusiasts will recognize this hardware as the LG Nitro HD on AT&T and the LG Spectrum on Verizon. In both cases the major draws are a 4.5-inch IPS LCD display with a resolution of 1280×720 and a newfangled LTE radio. Other charms include a 1.5Ghz dual-core processor, a full gigabyte of RAM, and an 8 megapixel camera. The relatively small 4GB of on-board storage can be expanded with a MicroSD card, though we don’t know if the German model of the Optimus True HD LTE will have a freebie or not. Unfortunately the phone is running Android 2.3 with LG’s customized interface, but it should get Ice Cream Sandwich eventually.

Carrier choices will probably be limited to O2, the German arm of T-Mobile and Vodafone, which are the only ones offering limited LTE service at the moment. As for wider European availability, that largely depends on LTE rollout. The next-generation wireless standard is still in its infancy across the pond, and launching the Optimus True HD LTE on a standard 3G network wouldn’t make much sense.