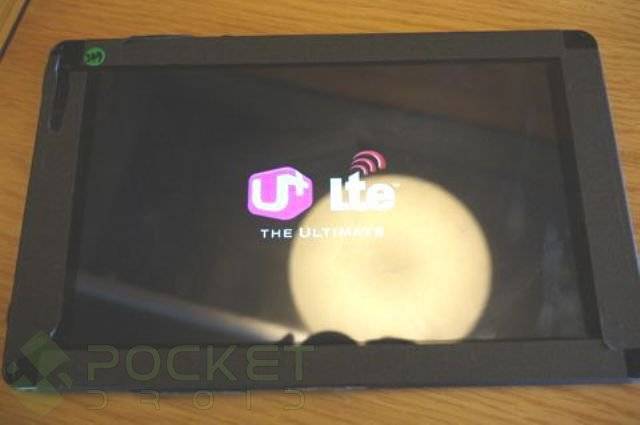 LG’s first run in the tablet game didn’t go quite so well but they appear to be back and ready to give it another try with the LG Optimus Pad 2. Many are calling it the Optimus Pad LTE and these latest images seem to confirm that possibility. The original, better known as the T-Mobile G-Slate didn’t sell too well with it high price and need for cheap blue and red 3G glasses.

The new Optimus Pad 2 leaked late last month and today we have a few more photos. Sadly the device is wrapped in some sort of tape to protect the look or possibly the leakster although we clearly see the AT&T 4G LTE boot animation with the image above. The photos don’t reveal anything else for now and we don’t get a view of the rear. We’ve been hearing just like the original the new Pad LTE will offer dual cameras for 3D video but this time it will rock dual 8 megapixel cameras.

Along with dual cameras we also expect the same 8.9″ display size rocking a 1280 x 800 resolution NOVA display, 1.5 GHz dual-core processor, 1GB of RAM and the usual array or ports and micro-SD slot. Latest rumors also suggest Android 3.2 Honeycomb on board and the slate launching late December, with an update to Ice Cream Sandwich to follow in 2012.

At the via link below it’s pictured with the Galaxy Tab 8.9 but seems to be a bit bigger, although we don’t expect it to be a 10″ device. Hopefully LG will be announcing more details on their next slate soon as we’d love to see if they’ve made improvements from the original.