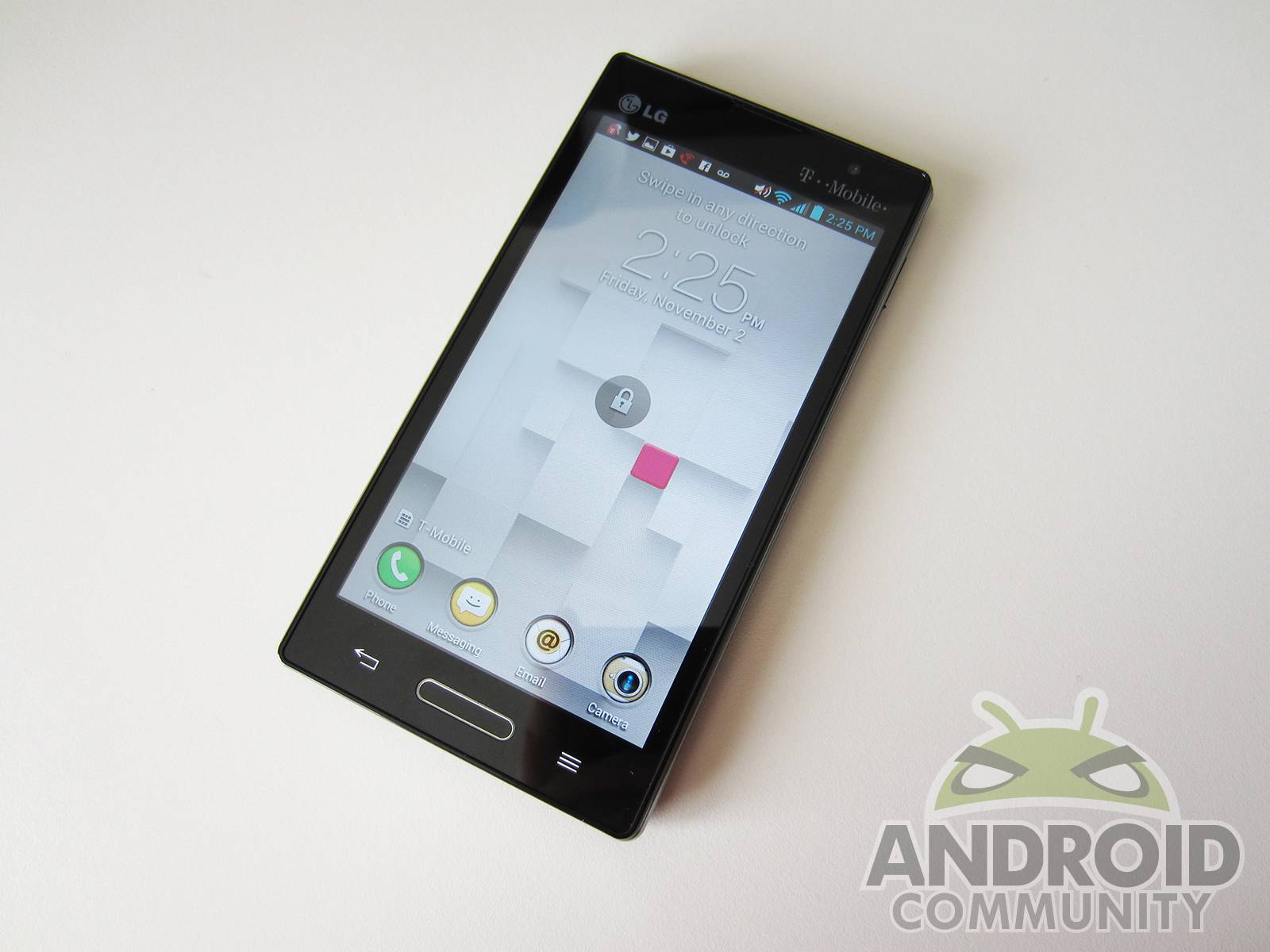 LG has certainly been on a roll recently. They made Google’s newest Nexus smartphone, the Nexus 4, and they released their new flagship device, the Optimus G, just recently on AT&T. However, LG isn’t just about the high-end game. They came out with a set of mid-range Optimus devices throughout the summer, and their latest one is the Optimus L9, which was released through T-Mobile on Halloween. We ended up getting our hands on one and decided to run it through its paces to see if it’s worthy of the $79.99 price tag. Let’s see how it fared.

The Optimus L9 is extremely light and thin (4.2 oz. and 0.36-inches thin). It’s not quite as thin as Samsung’s Galaxy S III, but it’s right on par with the iPhone 4/4S, which can still be considered really thin despite it being a last-gen device. The L9 runs on a 1.0GHz Texas Instruments OMAP 4430 dual-core processor with 1GB of RAM and 4GB of storage. Unlike recent Android devices, LG decided to stick with the microSD card slot, so while the 4GB of internal storage is extremely low (and quite ridiculous), you can easily pop in up to a 32GB card to bump up the storage capacity.

The L9 features a 4.5-inch IPS LCD display with a qHD resolution of 960×540, which gives the screen a surprisingly low pixel density of 245ppi, which is lower than a lot of two-year-old devices (like the HTC Incredible, for instance), but despite the display not being HD, it doesn’t look half bad. The contrast is good, and the saturation makes icons and images really pop. On top of the display is none other than Corning’s toughened Gorilla Glass 2, which protects the screen from most scratches, but might not be so lucky when it comes to accidental drops (I wasn’t brave enough to actually test this out). 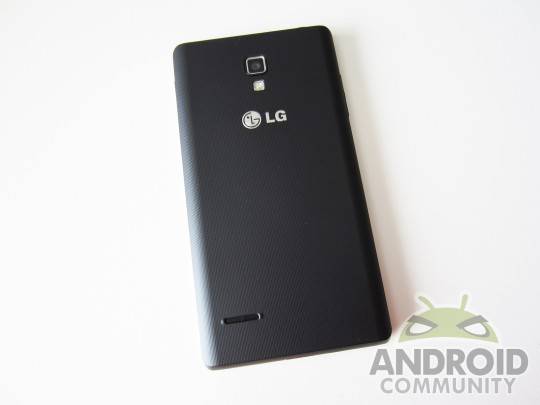 The L9 has a home button at the bottom that’s almost flush with the surface, and there’s also back and menu soft buttons that appear hidden when they’re not lit up — a nice touch. On the left side you have your traditional volume buttons and the power button rests on the right side. On the top-left there’s a 3.5mm headphone jack with an ambient noise sensor right next to it, and on the bottom you’ll find the microUSB port and microphone. On the back, there’s a 5MP camera with a single-LED flash, and a 1.3MP camera situated on the front.

If you’re looking for the microSD slot, it’s under the battery cover, which is surprisingly pain-free to snap off. The speaker is on the back as well, which is obviously in the exact opposite direction of where it should be facing. Usually on most devices, though, you can cup your hand around the speaker easily depending on its location in order to redirect the sound, but I noticed that there’s really no good way of doing this on the L9. The battery cover also has a unique texture to it that gives your fingers the illusion that it’s almost rubbery, so the phone feels really nice in the hand and it’s easy to grip, despite how thin it is.

The LG Optimus L9 runs Android 4.0.4 Ice Cream Sandwich. There’s nothing too surprising here other than LG’s Optimus UI that’s running on top, as well as a few bells and whistles from T-Mobile. LG’s UI is very light and doesn’t get in the way much of the true Android experience, but T-Mobile’s different apps and widgets are definitely in your face. The user interface is really smooth, and I didn’t notice any slow down other than the occasional third-party app crashing on me once or twice. Of course, the L9 may not be a Galaxy S III or an Optimus G, but as a lower-end, affordable option, it performs extremely well.

As with any carrier device, though, there’s a ton of pre-installed apps that come with the phone, and many of them you probably won’t end up using. Game Base, 411 & More, CallerTunes, More for Me, and SmartShare are some of the apps that most users probably won’t bother with, but some of the useful apps that come pre-installed are Amazon, Polaris Office, Slacker Radio, and TeleNav. One app in particular, Lookout Security, automatically scans every app you download and install, and it backs up your device, as well as attempts to locate your phone if it becomes lost or stolen. 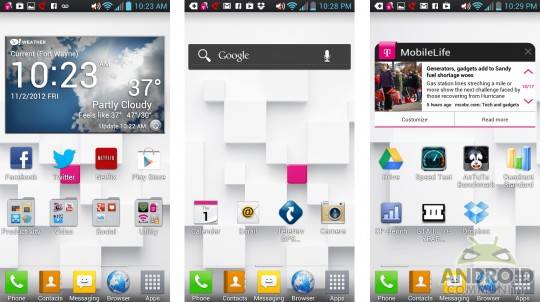 The keyboard is very quick and responsive, and I had no problem getting used to typing out text messages and even writing a couple of paragraphs of this review. Plus, the larger screen allows for a bigger keyboard that’s easier to type on for larger hands, and it’s even better for smaller hands, of course. The keyboard also includes its own version of gesture typing that’s a lot like Swype, which did a good job forming the words that I wanted it to most of the time, but sometimes the suggestion system would auto-complete words that were a bit off from what I actually wanted.

The battery was probably one aspect that I was surprised by. I expected it to only last throughout the day before I would have to charge it later in the evening, but I was consistently getting a full 24 hours out of the device before it would dip below 20%.

For example, I started playing with the phone in the afternoon and spent most of the evening downloading apps, surfing the web, running benchmarks, and playing a couple of games, while having WiFi, 4G, and location services turned on the whole time. By the time I went to bed that night, the phone was down to 53% from a full charge that afternoon. When I woke up the next morning, the battery was down to just 50%, so it seems that it fares well overnight even while having all of the connectivity options on the entire time. I played around with the phone little by little throughout the next day by watching shows on Netflix, checking email, and surfing Facebook and Twitter. It wasn’t until the evening when the battery creeped down to 20%. 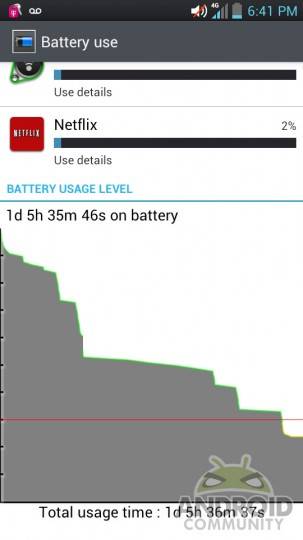 The battery packs in 2,150 mAh of juice, which isn’t small by any means, but it’s also not a crazy amount, so I was pleasantly surprised that I could go a full day and night without having to tether it to the wall, which says a lot about the hardware and software’s ability to sip on power. I reckon that with just moderate use, you could get two days out of it, easily.

The Optimus L9 features a 5MP rear camera that’s capable of shooting full 1080p HD video. There’s also a 1.3MP front-facing VGA camera, but that’s mostly for the occasional video chat with a friend or family member. The rear camera is where all the action is at. Photo quality is respectable, but there’s nothing that we haven’t seen before on similar handsets. It takes decent outdoor photos, and indoor photos are fairly good as well, although low light can be a problem, and the flash will end up kicking in. This is to be expected, though, with most smartphones.

There’s quite a few settings and presets that users can change around. You can adjust things like the brightness, ISO, and white balance, as well as toggle the shutter sound. There’s also a voice shutter feature, where you can yell, “Cheese!”, and the camera will take a photo without any button pressing necessary — great for when the photo taker wants to be in the picture as well.

Video quality is average. It has decent contrast and saturation, but it’s nothing too spectacular. It takes average video and definitely works in a pinch if you don’t have your main shooter around. The camera also comes with a panorama mode, which a lot new handsets are now coming with right out of the box. All you have to do is press the shutter button and pan your phone across a landscape or whatever you’re wanting to capture. It does a decent job at stitching the photos together, although as with a lot of automatic panorama modes, it can make some weird stitching mistakes at times, but I’ve never noticed anything drastic. However, the big problem with the panorama mode on the L9 is that it looks like it uses the video camera to capture the panorama and not the actual photo camera. You can easily tell that the quality of the panorama photos are definitely not 5MP image quality. This isn’t too big of a deal, but don’t expect excellent results when you want to shoot a panorama.

Overall, the camera is decent, but if you truly care about taking quality photos and videos, your dedicated camera should still be your go-to shooter. However, if you’re not too concerned about quality and are just wanting to get the shots you need, the L9’s camera is perfect for just that.

As usual, I ran a few benchmarks to test the internal hardware’s capability, and while it certainly isn’t up to par with an HTC One X or the Galaxy S III, the L9 holds its own against several last-gen high-performance handsets, such as the Galaxy Nexus and the Galaxy S II. It scored over 5,700 in AnTuTu, but fell short slightly with a 3,300 in Quandrant. We can blame that on the slower OMAP processor that’s under the hood, compared to the many devices out there currently running Qualcomm’s faster Snapdragon S4. In CF-Bench, the L9 scored just over a 5,200 — right up there with the Galaxy S II and tying with the HTC Sensation. 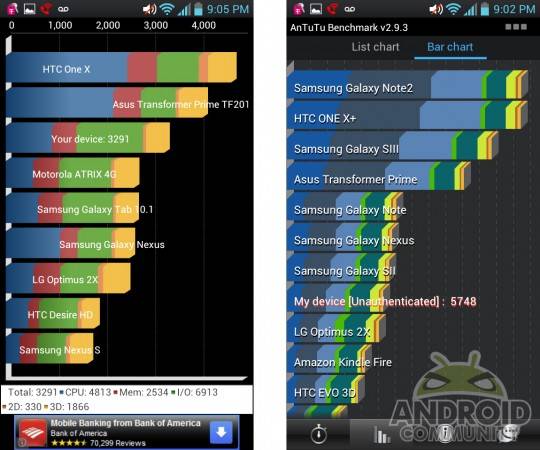 As far as T-Mobile’s 4G HSPA+ service, I had mixed results. Overall, I averaged around 8Mbps download speeds and around 1.5Mbps upload speeds. I went all around town attempting to find the best speeds, but ended up topping out at 11Mbps down during testing. Obviously, your mileage will vary, so don’t completely take my word for it. 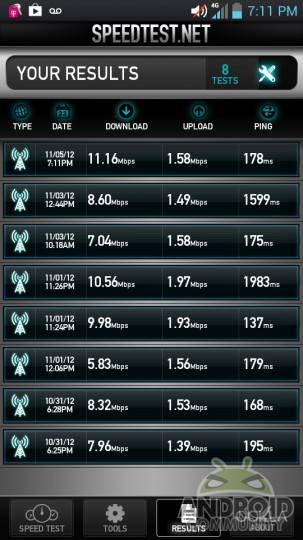 I won’t beat around the bush: For only $80, this phone performs, and if you’re looking for an extremely-thin handset that has an affordable price tag, the L9 could easily be a good choice. However, there’s still some sacrifices that you’ll have to make if you decide to grab this device. It doesn’t have a HD display, which is particularly disappointing considering that it has a huge 4.5-inch screen. Also, the camera isn’t quite good enough to replace your dedicated point-and-shoot camera. However, if you’re not too concerned about photo or video quality and just want the plain ability to take photos and videos, then you won’t be disappointed. 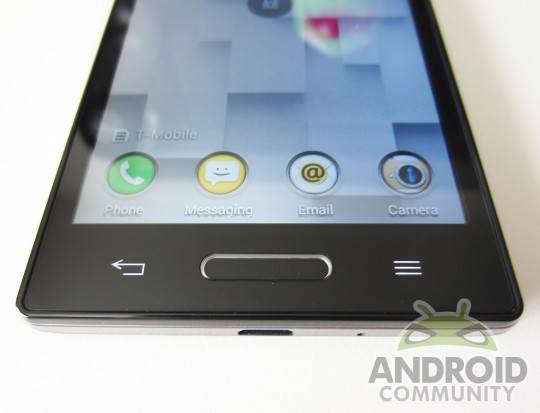 I only wish it had a slightly faster processor, though. The TI OMAP 1.0GHz chip is certainly fast and it makes the phone extremely smooth and snappy, but knowing that other budget phones are sporting the quicker Snapdragon S4 (like Samsung’s Galaxy Stellar) makes me think that LG could have done just a bit better in this area.

However, these aren’t complaints so much as just factors to be aware of. No phone is perfect and that goes double for budget devices, but the Optimus L9 is a sleek and thin device, giving it the illusion of a top-of-the-line flagship phone. It doesn’t quite stand out from the rest of the Android crowd, so it’s definitely an underdog phone that may not get a lot of attention, but I was honestly surprised when I saw that you can grab one for only $80, which may make it more appealing to those looking for a mid-range device.