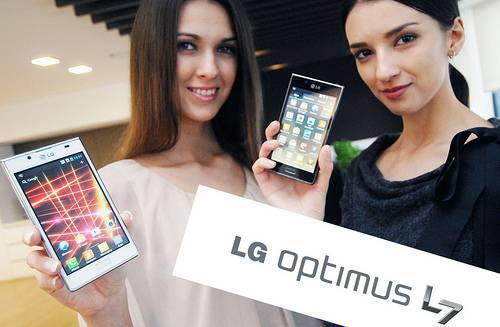 There’s a brand new smartphone making waves in Europe today… and it isn’t the LG Optimus L7. But id the top end of LG’s stylish new trio is what you’re craving, you won’t have to fight the press in London to get a peek at it. LG announced that the L7 is going on sale in major retailers across Europe today, spreading joy through an 8.9mm profile and Ice Cream Sandwich at launch.

As far as we can tell, the Optimus L7 is the first LG phone anywhere to get Ice Cream Sandwich – a fact worth celebrating, as the South Korean manufacturer has a less than stellar reputation when it comes to software. It’s still running a customized and familiar-looking interface, though. Other charms include a 4.3-inch display and styling modeled after LG’s PRADA series, but the hardware underneath is a little uninspiring with a 1Ghz single-core processor, 512MB of RAM, 4GB of storage and a 5MP camera.

LG didn’t say how much the Optimus L7 would cost, but a previous European listing had it set at €319 unlocked ($420 USD) or free on contract. The L7 is showing up a little late across the pond, so who knows when its little brother the L5 will appear. Currently there’s no news of an American version, but Rogers in Canada is set to get the Optimus L7 later this year.