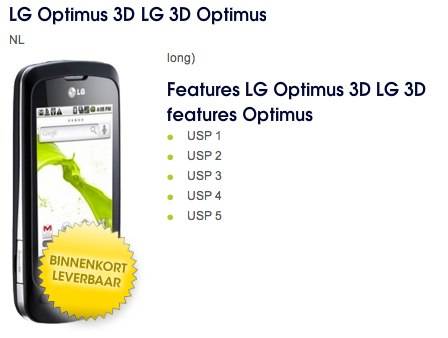 LG’s promised Optimus 3D smartphone has shown up ahead of its expected MWC 2011 debut, after having been teased earlier this month. The Dutch arm of retailer The Carphone Warehouse has put up a coming soon page for the smartphone, though exact details on the LG Optimus 3D are still in short supply.

Back at CES, LG’s, marketing strategy and planning team director James Choi confirmed that “3D mobile display is one technology that isn’t 3-5 years down the road … You’ll be very surprised shortly, of an actual working 3D device from LG.” Mobile devices are arguably more suited to 3D than bigger screens like TVs, given they can use glasses-free autostereoscopic panels rather than demanding special eyewear.