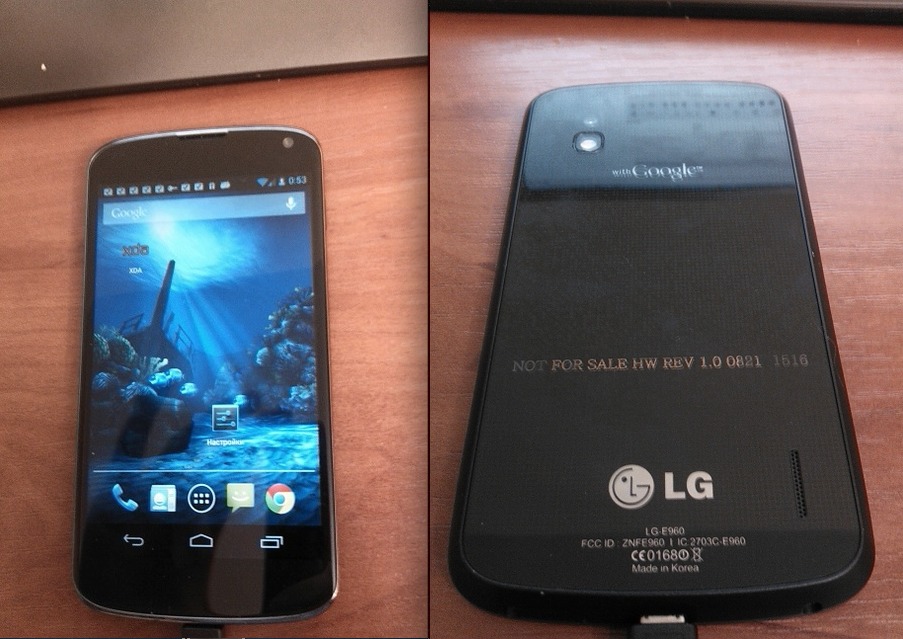 Another LG Nexus has appeared over on XDA this evening, making the rumors sound more and more true by the hour. We now have what looks to be two different models hanging out in the wild. The reports of Google handing them out to staff last week seems legit. This is another LG-E960 — some are calling the LG Optimus G Nexus — but for now we’re going with the LG Nexus. More details below.

While everything is still just rumors at this stage, we’ve heard multiple reports suggesting Google will take the same approach as all Nexus devices. That being no micro-SD slot and offer different storage options. You’d think they learned after the Nexus 7 having 8GB being not enough — because now they are set to launch a 32GB model. The leakster with the LG Nexus has confirmed the specs, and sadly also confirmed the device only has 8GB of internal storage and no micro-SD slot. Get out the pitchforks guys!

Just like the Optimus G, the Nexus device pictured here rocks the 1.5 GHz quad-core Snapdragon S4 Pro processor, 2GB of RAM, and has a 4.7-inch 1280×768 resolution. He lists it as 768×1184 (for the on-screen keys) and has also confirmed the camera is 8 megapixels. The back is not removable, we have no micro-SD support, and sadly only 8GB of internal storage. Recent rumors have slated Google will be offering both 8 and 16GB versions in the Play Store — so that makes sense. I’m hopeful for a 32GB option too, and I’m sure I’m not alone with that thought. This is probably to cut costs and bring as low of a price as possible to market.

Lastly the leak confirms Android Jelly Bean MR1 for the OS, and that the device is HSPA+ only, no 4G LTE. It works with both AT&T and T-Mobile just like the HSPA+ Galaxy Nexus available today in the Google Play Store. At this moment we aren’t sure if Google will be offering 4G LTE models, but so far it looks like they won’t be unless carriers get involved. Tomorrow we’ll hopefully learn more from this trusty leakster so stay tuned for more details, or hit the via below.