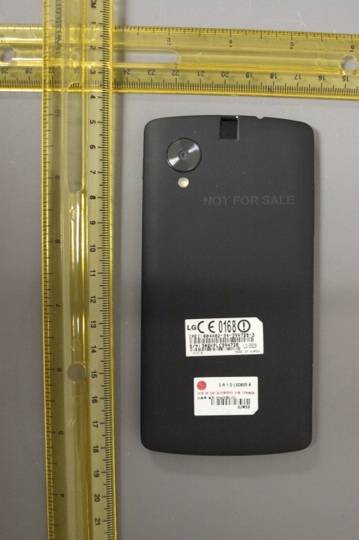 Coming by way of a recently discovered FCC filing, it would appear as if we are getting a look at what will become the next Nexus smartphone. The handset is believed to be the Nexus 5 and it is looking more and more like this one will be coming by way of LG. As we often see with an FCC filing, this one did contain a variety of images. These were mixed with some internal and some external photos and sadly, not all of the external images were perfectly clear.

What we are seeing is a handset that sports similar looks to that of the currently available Nexus 4. Basically the overall shape and size appears similar. As well, the rear-facing camera and flash are sitting in the same corner. Though, the camera lens on this model does appear to be a bit more obvious.

There wasn’t any specifics in terms of the camera, but we suspect current Nexus users will be hoping for an improved camera experience. Other items spotted from the images show the headphone jack sitting up top with the power button and volume rocker sitting on opposite sides of the handset. And as one would expect, the USB charging port is on the bottom.

While most of the external features of the handset can be seen and identified, there is one mystery item located on the back. Specifically, sitting centered along the top of the back, just to the side of the headphone jack. Speculation points towards that being an IR blaster or fingerprint scanner, though the space seems to be an incorrect size for either of those. This is nothing more than additional speculation, but that could be something that will only be found on a pre-production device.

Otherwise, we did manage to spot what appears to be a 2300 mAh battery when looking at the internal images. While we certainly need some additional details, we cannot help but overlook the bit about these images matching up with what we saw in the Kit Kat video. Time will tell if this proves to be the LG Nexus 5, but for now it looks like that is where we are heading.