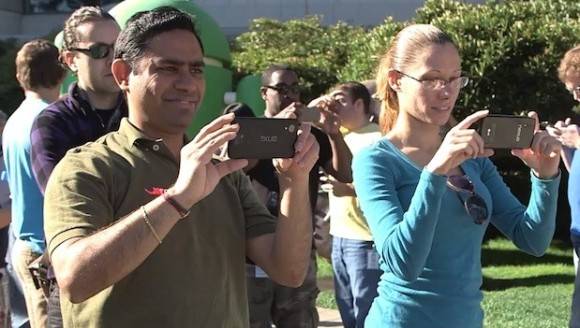 Today has been full of excitement and random news with Google’s own Sundar Pichai announcing Android 4.4 will officially be called KitKat. Along with the announcement was our first pictures of the KitKat statue going up on the Google HQ lawn, just like previous years, but something caught a few eagle-eyed viewers eyes. Did Google just accidentally unveil the new LG Nexus 5? Possible, but they quickly pulled the video.

Just like previous Android releases Google gets another awesome Andy statue to go on their front lawn, and this time was a big chocolate statue. Like previous years they make a wonderful little video and show off the moment, and let us all relive it. However, one Google employee who was also recording the event (at 38 seconds in) appears to be holding a mysterious device. This likely is the Nexus 5 folks.

We’ve reported on countless rumors surrounding the next Nexus device from Google, and many believe it will be another LG device similar to the LG G2 announced last month. A few rumors suggested the LG G2 will be the base for the Nexus 5, just like the 4, but the design will closely resemble the new ASUS-made Nexus 7. Complete with a matte back and a similar design around the camera. We reported on this rumor, and now the device seen in the video below appears to confirm those reports. 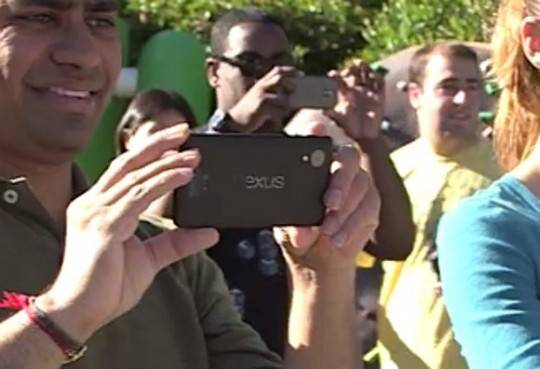 What you see above is the purported LG Nexus 5 right in the hands of a Google employee. We’re willing to bet it’s also running some form of Android 4.4 KitKat too, but that’s just a crazy wild guess. If previous reports and the LG G2 base for a design is correct, here’s what to expect. A 5.2-inch 1080p HD display, Snapdragon 800 quad-core at 2.3 GHz and 2GB of RAM, a 13 megapixel camera and a massive 3,000 mAh battery for all day usage.

We’re not going to speculate too much here, but we’ve heard the new Nexus will be quite powerful and match the Nexus 4 on pricing. Well, before the price cuts last week. Get excited folks, and hopefully it supports 4G LTE on all major US carriers, including Verizon.