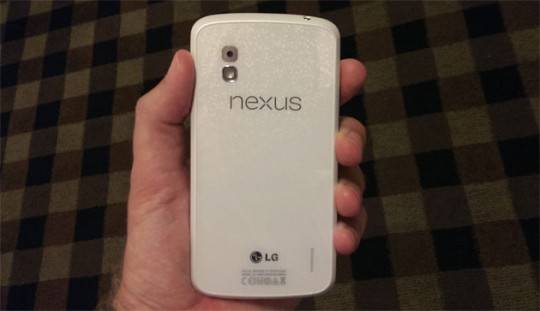 As we’ve seen countless times in the past, a white LG Nexus 4 is indeed real and coming soon. The question however, is exactly how soon? It was first spotted last year, then again a week before Google I/O earlier this month. Reports have supposedly confirmed the new color and handset is going to be released in early June, and now we’re seeing official press images starting to leak.

While enjoying the festivities at Google I/O a rumor surfaced that the Nexus 4 in White with Android 4.3 Jelly Bean would be announced come June 10th. While we still can’t confirm that, everything is starting to line up over these past few days.

Last week Android 4.3 was spotted on a Nexus 4 at a trade show, and now today we’re seeing official press photos of a white Nexus 4 leak in the wild from the guys at Android Police. Sadly we don’t have too many other details. They’re being reported as model number E960W, the original Nexus 4 was E960, and apparently won’t be much different. There’s been reports of an LTE model and even a 32GB option, but the leakster here couldn’t confirm any such reports.

To take things further according to AP the handset will be announced soon with Android 4.2 Jelly Bean, which means this is probably just all LG’s doing, and not Google. If this ends up accurate that could simply be because Google’s yet to announce Android 4.3, and once they do, this device will of course get updated.

So far we’re still leaning towards a June announcement of both the white model and 4.3 Jelly Bean, but anything is possible at this point.