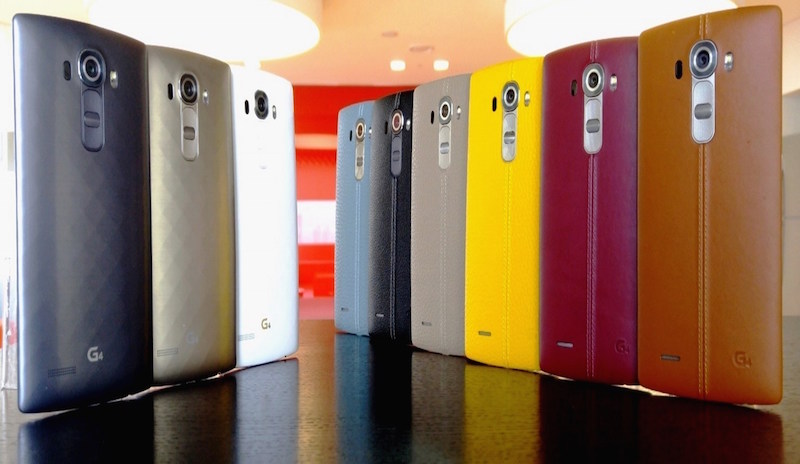 After months of leaks, speculations, rumors, and teasers, the LG G4 is finally and officially available in the US. The latest flagship phone is now on sale in stores and online through the top mobile carriers (AT&T, T-Mobile, Verizon, US Cellular) and national retail chains Best Buy and Amazon. This launch in the country is expected to bring a better mobile experience to Android fans looking to replace their old phones.

The LG G4 is available in different variants: Ceramic White and Gold, Metallic Gray, Genuine Leather Black, and Genuine Leather Brown. The carriers have announced pricing and more details on each of their websites. From now until June 21, those who buy an LG G4 will receive freebies include a memory card, extra battery, and a battery charging cradle. This is similar to the special promo in South Korea for the first adopters getting a 64GB card and free replacement. We’re guessing the charging cradle has something to do with the Quick Charge 2.0 feature.

Let’s take a look at the carriers’ pricing and plans for the LG G4:

Free items include 32GB microSD card, battery charging cradle, and a 3,000 mAh battery. These will be given to anyone who buys an LG G4 before June 25.

As for T-Mobile, LG made the phone available on June 3. The 32GB LG G4 is offered in Metallic Gray and Leather Brown. It’s cheaper with a $600 price tag. With no downpayment, you can get it with a $25 monthly free for 24 months. As for the free items, T-Mobile is giving away a 128GB microSD card. Unfortunately, there’s no charging cradle or an extra battery. LG G4 is available for purchase from T-Mobile’s retail stores and website.

Verizon started selling the LG G4 only last June 4 with pre-orders starting last May. Available colors are Ceramic White, Genuine Leather Black, and Metallic Gray. The no-contract 32GB version is $549.99, with a 2-year contract it’s $199.99 while under the Verizon Edge plan, the G4 is $22.91 for 24 months. Like AT&T, Verizon is giving away the freebies–32GB microSD card, battery charging cradle, and an extra 3,000 mAh battery.

National retail channels Amazon and Best Buy also started offering the LG G4. On Amazon, phone is $629.99(AT&T) or $599.99(Verizon) without a service plan and $199.99 with a 2 year contract(Verizon). You can also check out Best Buy for the plans from the same mobile carriers.