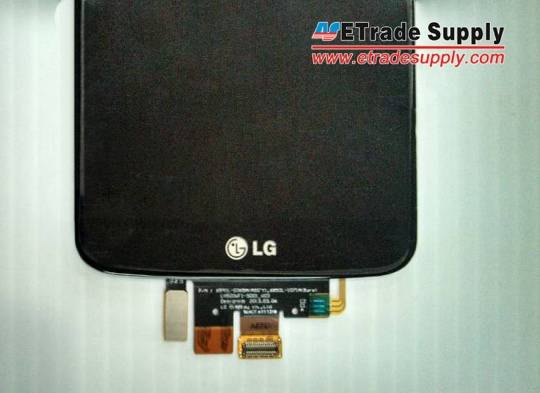 Recent LG G2 leaks were pointing towards the handset as coming available for those in Korea shortly after the official unveiling. Of course, that will just be the first stop on a global release that is expected to reach 100 carriers around the world. But as those who have been following along will likely realize, that is just one of many G2 related leaks and as of this morning we have yet another.

This latest leak is arriving in image form, though, unlike some of the earlier leaks dealing with the outside — this one brings a look at the display and digitizer assembly. The images were shared by the folks at ETrade Supply and are offering a few views of the outside of the display and the inner digitizer assembly. That being said, there wasn’t much in the way of new information along with these images, however the look at the front does seem to match up with earlier G2 image leaks.

At present the LG G2 is expected to arrive with a 5.2-inch 1080p display and quad-core Snapdragon 800 processor with 2GB of RAM and a 13 megapixel rear-facing camera. A recent user manual leak also confirmed a few details. We now know the handset will measure in at 138.5 x 70.9 x 8.9mm and weigh in at 143 grams.

That same leaked manual also detailed the volume rocker controls. Those had been seen before, however the manual pointed towards the button in the middle as being a power/lock button. Previous rumors had speculation pointing towards that being a fingerprint sensor.

With that, we aren’t sure the rumors will stop, however we do know the handset will be officially unveiled on August 7th. Aside from getting a confirmation of the specs and other features, we will be looking towards LG to hopefully provide some carrier and release timeframes.