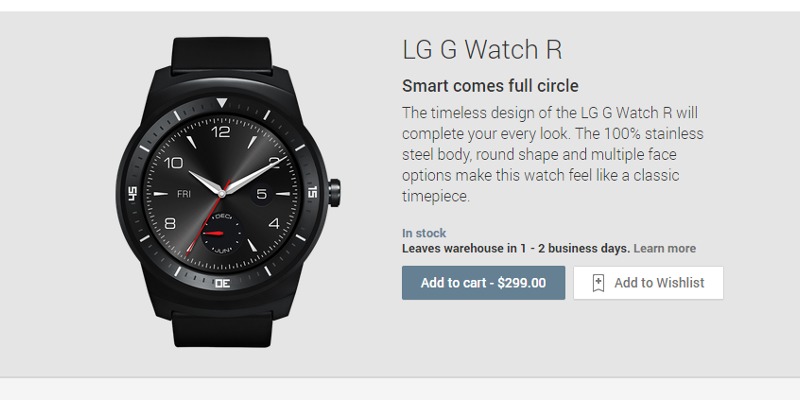 LG‘s debut for its first and much hyped round smartwatch has finally come. At least as far as Google Play Store is concerned. The G Watch R has joined its brethren in Google’s Android Wear gallery and is now available for purchase. It does come with a slightly higher price tag than the first batch of smartwatches, but the real question is whether the new stylish style justifies that price bump. Of course, the G Watch R definitely is more than just a pretty face.

As fancy as a circular smartwatch display may look, it’s actual usefulness and practicality still needs to be tested. On one hand, there is definitely a class of people who would prefer their smartwatch not too look like bulky handcuffs and would otherwise be estranged from the smartwatch movement without these round faces. On the other hand, most, if not all, of our touchscreens have taken on a more rectangular shape, maximizing every pixel and every corner available. Motorola and LG would claim that the circular smartwatch actually offers more space, but that’s only natural for them to say so since they’re making such smartwatches in the first place.

We can finally put those theories to the test now that this second type of smartwatches are available for purchase. Aside from the design, the G Watch R also boasts of a 410 mAh battery that is larger than the first batch of Android Wear devices. It also has a heart rate monitor which is now becoming a mainstay of smartwatches. It’s also waterproof, up to 1 meter of water for a maximum of 30 minutes. And changeable straps, sold separately, can help keep your smartwatch from looking out of fashion after a while.

The LG G Watch R sells for $299 from Google Play Store and ships out in 1 to 2 business days. Alternatively, AT&T subscribers can also get this smartwatch from the carrier’s retail outlets starting November 7 for the exact same price.