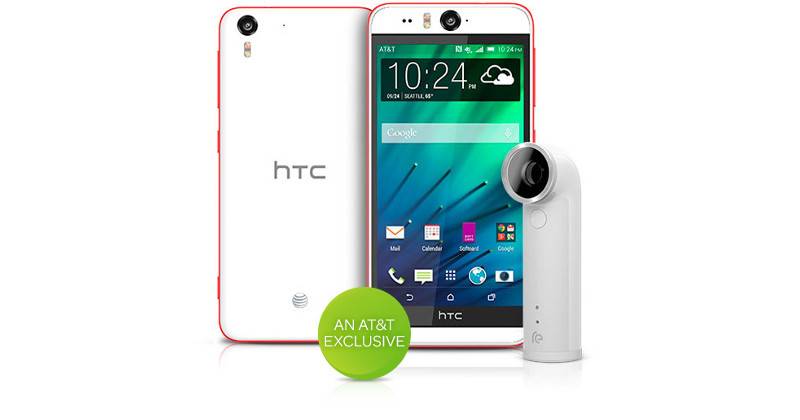 AT&T has just unleashed a flood of announcements that all revolve around Android or Android-friendly devices in time for the upcoming holiday madness. Starting this month, November 5 at the earliest, the carrier’s subscribers can avail themselves of the selfie-genic HTC Desire EYE and the circular Android Wear smartwatches, the LG G Watch R and the Moto 360. In addition, there are discounts to be had, including one for the rather odd HTC RE camera if you purchase it together with HTC’s EYE-ful smartphone.

HTC’s venture into a new turf with a photographic bent didn’t result in just one product but in an entire ecosystem. Of course, it wouldn’t be complete without a smartphone in the ranks. The HTC Desire EYE is the standard bearer for HTC’s new EYE line and it is unequivocally geared towards photography, with a front-facing camera that is just as strong as its rear, sporting a 13 megapixel sensor and an LED flash of its own. The rest of the smartphone’s specs are impressive as well, with a 5.2-inch Full HD screen, a 2.3 GHz Qualcomm Snapdragon 801, and a waterproof rating of IP67. Without an annual contract, you can get the Desire EYE from AT&T for $549.99, otherwise it costs $149.99 with the regular two-year agreement. Plus, if you decide to complete the EYE experience with an HTC RE camera, you can get the latter at a $50 discount. Availability for the HTC Desire EYE starts on November 7.

Moving over from smartphones, we come to AT&T’s latest Android Wear additions. The LG G Watch R is one of two, so far, round-faced Android Wear smartwatches in the market. This one boasts of a 1.3-inch circular P-OLED display, which LG claims to be the first in the industry. It also has a 410 mAh battery that is notably larger than the rest of the Android Wear gang. Other features include a heart rate sensor and a water resistance grade of IP67. Although available only in black, different watch faces and interchangeable 22 mm straps still makes the G Watch R a potential fashion statement. The smartwatch will be available from AT&T’s online store starting November 5 but retail outlets will only start carrying it on November 7. LG’s round smartwatch will cost $299.

The other, and actually first, circular Android Wear will also be available from AT&T starting November 7. Although the Moto 360 doesn’t make full use of the whole display’s area, some have hailed this smartwatch to be classier and more generic in appeal compared to the almost sportswatch-like look of LG’s equivalent. The 1.56-inch display is powered by a 320 mAh battery and is also controlled by an ambient light sensor. The Moto 360 will cost $249 but, for a limited time, you can get it for only $199, provided you buy it with the new Moto X, which itself costs $526.99 without a contract or $99.99 with a two-year one.