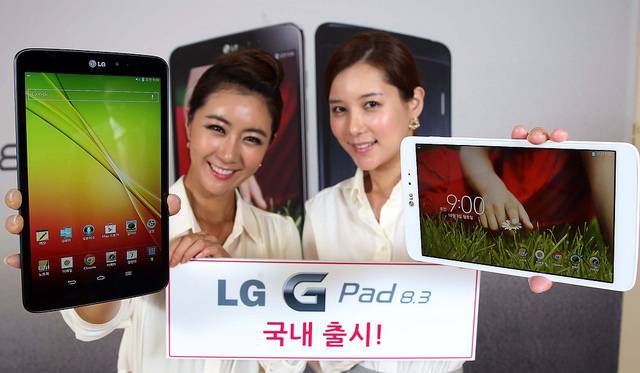 LG has just announced the availability of its latest incursion into the realm of Android tablets. The LG G Pad 8.3 will be hitting Korea starting next week, with a number of international markets to follow suit by the end of the year.

Announced at IFA 2013 early last month, the G Pad 8.3 represents company’s most recent attempt at penetrating the tablet market, something it has so far been unsuccessful with. But instead of outing a low-cost, mid-range device, LG is putting the tablet right in it’s “G” premium line. And, indeed, just as with its latest G2 flagship smartphone, the G Pad 8.3 managed to impress us in our initial hands-on with the device, which you can read here.

Aside from the impressive hardware, which includes an 8.3-inch 1920×1200 display and a 1.7 GHz quad-core Qualcomm Snapdragon 600, the G Pad 8.3 also showcases some of the software features found on the G2, such as the Knock-on locking/unlocking method and the Q Slide multi-tasking feature. Also making its debut on the G Pad is Q Pair, which not only pairs an Android smartphone with the tablet for network tethering, but also shares notifications between the two devices. You can, in fact, even answer calls or SMS coming from the smartphone on the tablet itself.

The LG G Pad 8.3, which will come only in white and black colors, will be available starting October 14 for 550,000 won, around $510, from LG’s Best Shop, online shopping malls, and department stores in Korea. Unfortunately, it seems that LG is suggesting that buyers also buy an LG smartphone, such as the G2, since only a WiFi model of the LG G Pad 8.3 is available.