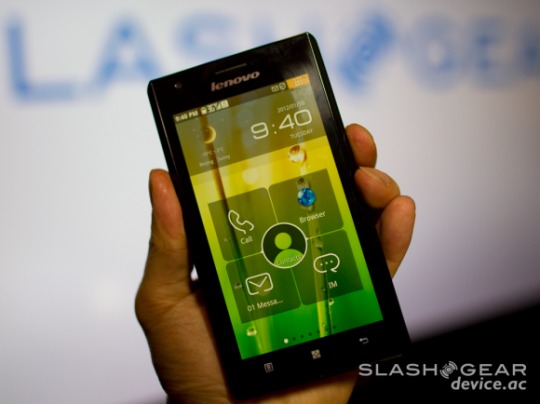 If you’re looking to get your hands on one of Intel’s first Android smartphones the Lenovo Racer-A could be your next chance. Previously known as the K800 this Intel Atom-powered phone was first shown off at CES earlier this year (see our hands-on) and has now gone up for pre-order in China.

When we first saw the phone we were quite impressed. If Lenovo could have released it in March or April it would have been a good move but things are taking a bit longer than expected. The first Intel-powered phone, the LAVA XOLO managed to be the first Intel phone to market, hitting stores late last month. Most likely the Lenovo Raver-A will be the second, and is up for pre-order in China right now at 360buy.com.

Intel and Lenovo’s Racer-A is a 4.5-inch 720p packing smartphone with Android 2.3 Gingerbread, an 8 megapixel camera with dual LED flash, and of course that Intel processor under the hood clocked at 1.6 GHz. Hopefully it will launch with Android 4.0 Ice Cream Sandwich but for now that doesn’t appear to be the case. It will run you around $520 USD and the site claims it will ship in June.

We’ve heard reports of it landing on AT&T eventually but still have nothing to confirm that release. Stay tuned for additional details all you Intel fans.