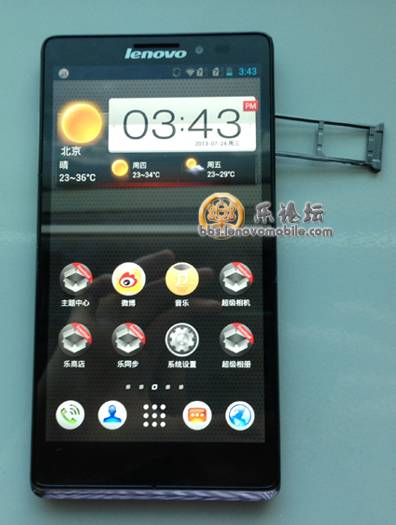 It seems that Lenovo is ready to get serious with its smartphone thrust if this latest leak is to be believed. The manufacturer, more known for its laptop business, will supposedly be switching to Qualcomm to power its next rumored smartphone, the Lenovo K910.

Lenovo announced its new K900 smartphone in January and while it does run Android, the device is actually powered by an Intel Atom processor, not your usual combination. Last month, there were already rumors of a successor, which was named the X910. Based on a leaked Antutu screenshot, the X910 is running at a clock speed of almost 2.2 GHz, quite above the K900’s 2.0 GHz speed. This started speculation that the next Lenovo smartphone would be running on a Qualcomm Snapdragon 800 processor.

Just a few days after that, new photos leaked giving the K900 successor a new name: the Lenovo K910 or K6. The photos more clearly indicate a Qualcomm processor, as well as a resolution of 1920×1280. Now we have another Antutu benchmark, this time naming the device as a K910, with the same speed as the X910, but scoring slightly higher, with 30059 against the X910’s 29231.

We’re not sure if the X910 and the K910 are exactly the same device or if the K910 isn’t just carrying a higher Intel Atom chip, although it would be hard to imagine Lenovo spending its resources on two almost similar devices whose difference would only be the CPU. There is no information regarding a reveal date of any kind, though it should probably happen soon if Lenovo wants to meet its quota of selling 50 million mobile phones before March 2014.