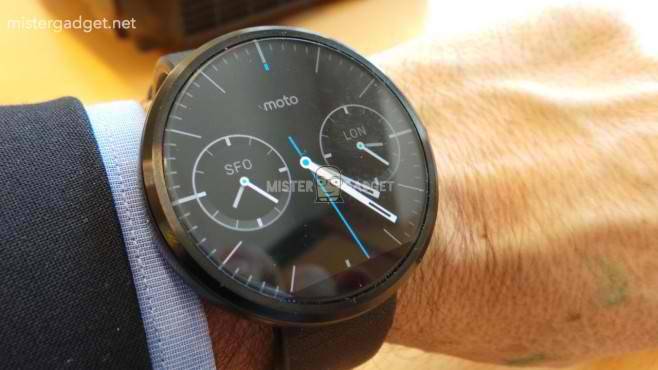 The upcoming Moto 360 smartwatch, the first one with a circular watchface, is already stirring up much anticipation. The latest leaked pictures show for the first time an idea of how users will charge their device, giving a small glimpse of the “secret charger”. The smartwatch, which will only be the 3rd one to run on the Android Wear platform, is rumored to come out this fall.

Based on the leaked photos on an Italian website, how the Moto 360 will be charged is a bit different from most smartwatches. One of the photos show a cradle where you place the smartwatch outwards so that you can still look at it even when it’s charging. There is still no confirmation which type of wireless charing will be used, although some FCC docs before showed it will be using the Qi standard.

Some photos show the smartwatch’s back unobstructed, revealing a few more details about it. Looks like it will be the expected stainless steel, but it also has other standard smartwatch things like the pedometer and the water resistant IP67. The photos show a bit more than what was reportedly revealed during the Google I/O last July and it will make the waiting for the official announcement even more intolerable.

Aside from the fact that it is circular, some features of the Moto 360 are highly anticipated. A hands-on video from Tech Crunch last month showed that it has ambient light sensor, which will automatically adjust the device’s brightness depending on the available light in your environment. The design also seems to be more sophisticated compared to other smartwatches in the market. Now the only question is: how much will we need to shell out to own this baby (and when are we actually going to get it!)