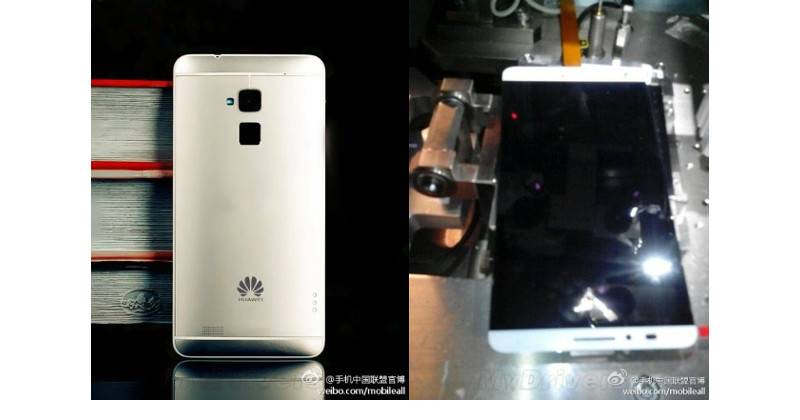 Huawei may have just unveiled the Honor 6 in June, but it seems it already has a new high-end smartphone ready to entertain the crowd next month at IFA. These photos of what is claimed to be the Ascend D3 show a smartphone design that is eerily reminiscent of the HTC One Max, including the brushed metal look, the segmented rear design, and what looks to be like a placeholder for a fingerprint scanner at the back.

Chinese manufacturers are notorious for their inclination, and sometimes even their remarkable ability, to imitate popular brands and devices, and this supposed Huawei Ascend might only reinforce that rather unfortunate prejudice. These photos aim to prove that the device, currently being labeled as the Ascend D3, has already entered mass production phase, but they also let us catch a glimpse of the rumored smartphone’s appearance, which really looks like an HTC product.

While the removable back cover alone tells no tale, when slapped on the device it shows a three-part rear design that is quite distinctive of HTC’s smarpthones. In constrast, other manufacturers like Samsung, LG, or Sony have their back covers take up the entirety of the device’s rear. Flip this Ascend D3 over and you will see the absence of side bezels, leaving the top and bottom as the only borders, again another HTC mark. And back to the rear, we see two holes arranged vertically, one clearly reserved for a camera with an LED flash beside it. The bottom one is speculated to be for a fingerprint scanner. If true, this would match the exact location of the sensor on the One Max. Samsung places its fingerprint sensor on the front home button.

What Huawei is doing that HTC isn’t is to have two versions of the device with slightly different specs. While both would have 6-inch screens, one would boast of 2K resolution while the other only of 1080p. One has a generous 3 GB of the RAM while the other remains at a conventional high-end 2 GB. Both, however, will be running on Huawei’s latest pride, the Kirin 920 processor and will be running the latest Android 4.4.2. This, oddly, sounds like OPPO’s Find 7 and 7a arrangement.

Whether Huawei is simply playing copycat or has something truly unique to offer, we will most likely know soon. The company has reserved a September 4 press event at IFA 2014 in Berlin where it will presumably be showing its hand to the public.