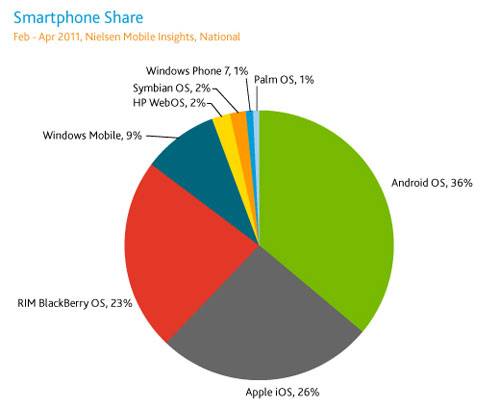 When it comes to data for seeing what smartphone operating system is the most popular with users or is growing the fastest we generally look to Nielsen. The last time the company offered some new insights on what the smartphone market looked like was back in April. Nielsen is back again with some new details on the smartphone market and it looks like the market might be leveling out growth wise according to the latest data.

The new data looks at the three month period from February to April 2011. Nielsen reports that the smartphone is increasing in popularity as a whole with 37% of all mobile phones in the US being smartphones. Android is still the top operating system, but it is no more popular than it was in April, the last time Nielsen surveyed the market. Android is still holding at 36%. Apple’s iOS also reminded relatively steady at 26% of the market.

Nielsen says that iOS’ percentage of the market is within a few points of where it was from the last survey. Interestingly the data shows that RIM’s loss in the market may have stabilized finally with RIM having 22% to 23% of the market. The latest figures from Nielsen also show that Android users are the most data hungry with the average Android user consuming 582MB of data each month and the average iPhone user consuming 492MB monthly. One of the interesting facts to me is that WebOS has a mere 3% of the smartphone market and its users are third in data consumption with 448MB monthly.