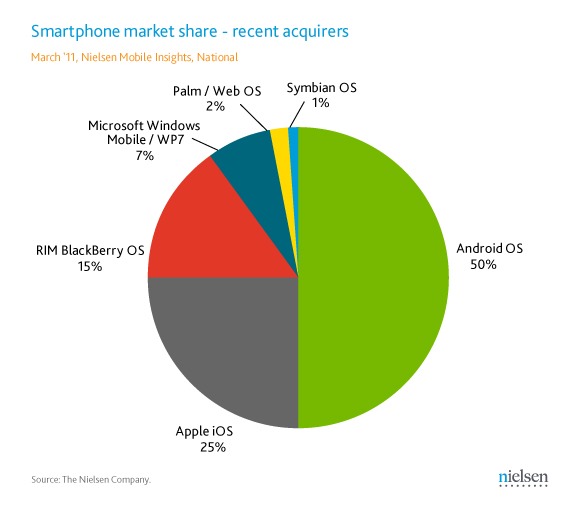 According to a recent survey done by AC Nielsen, smartphone users are hungry for more Android. The survey found that users preferred the Bot over both iOS and RIM phones, representing a dramatic shift from a similar survey just ten months ago. The latest figures show that 31 percent of consumers plan to purchase a new Android Smartphone, while 30 percent are looking to get an iPhone. RIM was a distant third with just 11 percent saying they preferred the business oriented handset.

The survey also found that the Android OS currently dominates half the smartphone market, twice as much as Apple’s iPhone and over three times as many as RIM. Other interesting stats is that Nokia, who once dominated the cellphone industry a few short years ago, only had a 1% saturation of those surveyed. And Microsoft’s Windows Phone 7 was also stuck in single digits with 7% market share. Palm’s WebOS was in the back of the back with just 2% of the pie calling into question if their upcoming WebOS tablet will make any inroads at all.

But the news isn’t too good for RIM, which quickly stole the market from Nokia’s Symbian OS thanks to it’s business allure. With corporations, and even the US Army looking to the Bot for it’s open source capability, can Blackberry turn the ship around? It seems unlikely. Apple, by contrast, isn’t too worried. Thanks to it’s successful launch on Verizon, Cupertino sold more than 18 million handsets last quarter and there’s rumors that with AT&Ts merger with T-Mobile, Apple is looking to make the iPhone available to T-mobile users as well.

But with manufacturers now launching dual-core Android phones and tablets, it seems there’s no stopping Android’s juggernaut for the foreseeable future.