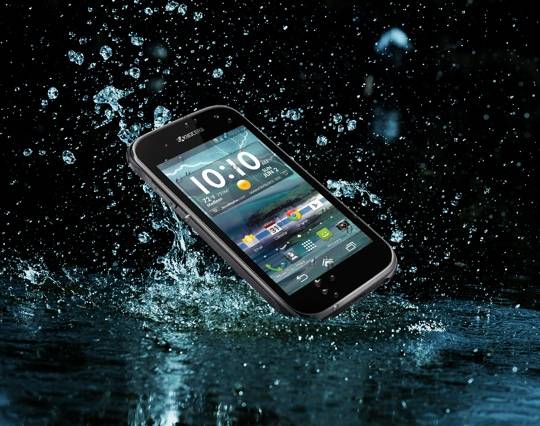 Kyocera recently launched the Hydro XTRM with MetroPCS and as of today, there is word of the durable and waterproof handset coming to another US carrier. This latest is T-Mobile, though, this time around the Hydro XTRM will only be available for business customers. Pricing has yet to be announced, however Kyocera and T-Mobile have said the handset will be available beginning on November 20th.

The Hydro XTRM feature set includes a 4-inch (800 x 480) impact-resistant display, dual-core 1.2GHz Snapdragon processor, 2000 mAh battery, 1.3 megapixel front-facing camera, 5 megapixel rear-facing camera and 4G LTE connectivity. There will also be Android 4.1 Jelly Bean. The key though is in the casing and the durability of the phone and to that point we look towards the IP57 and Military Standard 810G ratings.

Similar to some of the other Kyocera handsets we have seen recently, this one also has the Smart Sonic Receiver. Part of this is noticeable from the outside as there is no earpiece sitting where you would expect. Basically, this not only means one less opening in terms of the water-resistance, but it should also bring an improved sound. Kyocera mentioned how this will allow “users hear conversations in the noisiest industrial environments, even when wearing helmets or bulky ear protection.”

We did spend some brief hands-on time withe Hydro XTRM earlier in the year, and otherwise, we have reviewed several of the other rugged and waterproof Kyocera handsets. For those reviews, head into the Story Timeline sitting below.