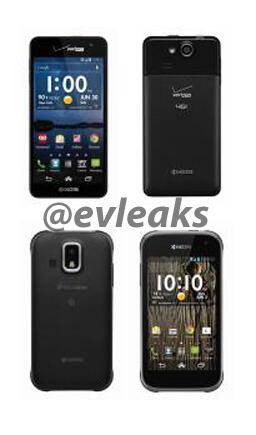 Today we’ve received info about another smartphone headed to Verizon Wireless in the coming weeks or months. Thanks to the popular leakster @evleaks, we are getting our first glance at the upcoming Kyocera Elite with Verizon 4G LTE. Yea, another Kyocera phone on Verizon. This is just one of many cheap feature phone type devices they’ve released lately too.

The name Elite makes this sound like a pretty impressive smartphone, but just like the Samsung Galaxy Grand it won’t be anything special. Lately I feel like I’ve been taking crazy pills, or someone from Verizon has at least. Skipping on flagship devices like the HTC One, being dead last to release the GALAXY S 4, yet dropping all of these cheap, budget friendly, junk smartphones.

I guess having the largest subscriber base in the U.S. helps. Not everyone wants a top-tier smartphone for $199 according to Verizon, because they appear to be the next Cricket and are focusing all their efforts on the mid-range offerings. Between this Kyocera Elite and the Kyocera Torque, LG’s budget Lucid 2, and of course that Ice Cream Sandwich powered Pantech Perception.

Maybe this is the calm before the storm and this summer we’ll get a new Motorola DROID, the X-Phone, and hopefully the HTC One makes its way to big red too. For now we have no details on the leaked device above, the Kyocera Torque, but most likely it will be about 4.5-inches and have mid-range specs at best, coming in around $79 or $99 on contract. That’s just a guess. At least it appears to have Android 4.1 Jelly Bean – so that’s a plus.

And then there’s also the Kyocera XTRM headed to US Cellular. We’ll update when we know more on either device.