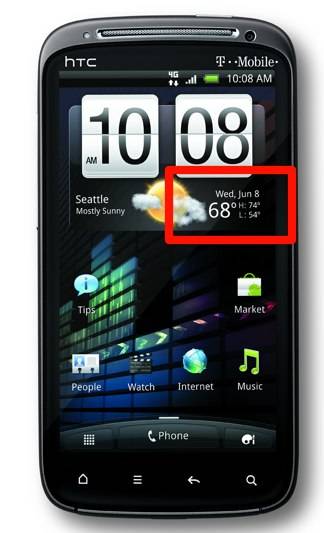 The HTC Sensation release date may have been prematurely released by a Google AdWords result and – perhaps a little more tenuously – a screenshot of the HTC Sense 3.0 widgets the company itself has used. TmoNews spotted that the top ad result suggested “HTC Sensation 4G – On 6/8 – Complete w/ HTC Watch & HTC Sense” which certainly implies a June 8 2011 release.

Meanwhile, the T-Mobile Sensation 4G press shot shows the HTC weather widget for June 8 too. On its own that probably wouldn’t be enough to tip it, but HTC wouldn’t be the first manufacturer to theme a press shot to go along with a launch date.

The Sensation 4G has a 4.3-inch qHD display, WiFi b/g/n, 8-megapixel main camera and 1.2GHz dual-core Qualcomm Snapdragon processor. More on the HTC Sensation in our hands-on with the European version from earlier this month.